The Jewish Conspiracy Conspiracy: Conservative Christian TV host and confirmed anti-semite Rick Wiles argues that the Jews are behind the Iowa caucus debacle, and that they “are going to be our masters if we don’t do something about it.”

Speaking on his TruNews program, a television “news” program produced for conservative Christians, Wiles argued that the results of the Iowa caucuses were “intentionally delayed and manipulated to benefit Israel.”

On the program Wiles asked his co-host, Doc Burkhart about the app that supposedly caused so much trouble for the Iowa caucuses:

The pro-Israel owner of the Times of Israel newspaper, he’s backing homosexual mayor Pete Buttigieg, and he’s the money man behind this app? Are you suggesting the Israelis are influencing the election to have the Democrats nominate its first openly homosexual presidential candidate?

Later in the program Wiles explained:

They might accuse me of being anti-Semitic for saying it, but the truth is there is an Israeli connection to the app that bombed last night in Iowa. But you’re not allowed to say these things. Everybody is being censored now. By who? The same people who are doing this stuff.”

It isn’t too hard to figure out what is going on. A coup. A takeover of the United States of America, unless we resist. We’re about 80 percent into captivity right now. They’re shutting down dissenting voices, they’re censoring voices that refuse to go along with the agenda.

We’re deep into the captivity right now… We’re losing our rights and freedoms and we’re being taken over by a foreign power that is anti-Christ. The very people who crucified Christ are going to be our masters if we don’t do something about it.

For those who want to dismiss Wiles as a lone lunatic, it is important to note that he is a popular conservative Christian broadcaster with a large audience, and White House press credentials.

As for the notion of a “coup” this is a familiar theme for Wiles. Earlier this year the conservative Christian TV host warned his followers that the effort to impeach President Donald Trump was a “Jew coup.”

Bottom line: Conservative Christian TV host and confirmed anti-semite Rick Wiles argues that the Jews are behind the Iowa caucus debacle, and that they “are going to be our masters if we don’t do something about it.” 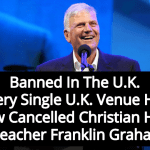 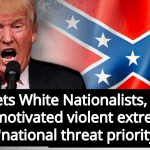