Bad Medicine: Symbolic of the moral and intellectual decay at the White House, a photo shows Vice President Mike Pence and his team trying to pray away the coronavirus.

According to EurAsia Review, the official White House photo by D. Myles Cullen depicts Vice President Mike Pence meeting with the President’s Coronavirus Task Force earlier this week in the West Wing of the White House.

Commenting on the story, Hemant Mehta at Friendly Atheist notes:

It’s not a joke when people say these Republicans are trying to stop a virus with prayer. What else did anyone expect? Science? Reason? Something sensible? Of course not.

While it is disturbing and heartbreaking to know that the man in charge of protecting the nation from the coronavirus would resort to something as useless as prayer, it is not surprising. In fact, it is no secret that Pence is a radical religious extremist.

Indeed, Pence is a terrible choice to lead any scientific or medical endeavor. The man is a dangerous Christian extremist who rejects science in favor of religious superstition.

Pence believes that creationism should be taught in public schools.

When serving as a congressman, Pence made it clear that he opposes evolution, and believes that only creationism (intelligent design) provides a “rational explanation for the known universe.”

Pence thinks the government should pay for gay conversion therapy.

In 2015, as Governor of Indiana, Pence allowed an HIV outbreak to spread, choosing prayer over a clean needle exchange. As a result of Pence taking the time to “pray on it,” citizens of his state suffered and died.

In addition to rejecting evolution, promoting gay conversion therapy, and allowing a deadly HIV epidemic to spread by choosing prayer over science, Pence has also claimed that condoms are “too modern and too liberal.”

Bottom line: Conservative Christians cheer while reasonable people are horrified at the sight of Pence’s team trying to pray away the coronavirus. 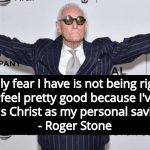 March 2, 2020 Trump Ally Roger Stone Finds Jesus After Being Convicted Of Multiple Felonies
Recent Comments
0 | Leave a Comment
Browse Our Archives
get the latest from
Progressive Secular Humanist
Sign up for our newsletter
POPULAR AT PATHEOS Nonreligious
1