Blue-Eyed Jesus Approves: Christian nationalists are advocating for secession, and the formation of a white ethnostate, in a new video produced, written, and narrated by white supremacist Faith Goldy.

Faith Goldy produced a video for VDARE making the argument for “conservatives, white advocates, immigration patriots, and Christian gun owners” to secede from the United States in a video titled “Whites Have Rights.”

The video argues for the “white right” to secede from the U.S. (the phrase “whites have rights” was a common slogan among those opposed to school desegregation, and the American Nazi Party). The video was written and narrated by Canadian white supremacist Faith Goldy, who has a long documented history of white nationalist rhetoric and advocacy.

In the controversial and despicable video white supremacist Faith Goldy suggests that white Christians should secede from the United States and create a Christian white ethnostate. Goldy, who produced, wrote and narrated the video, opens by asking a rhetorical question:

What if all the conservatives, white advocates, immigration patriots, and Christian gun owners simply moved out? Imaginably, it’d be a lot easier for Leftists to build their gun-free, refugee-rich Shangri-La.

Goldy goes on to suggest:

In addition, Goldy also regurgitates common talking points used by White Christian Nationalists. For example, at one point Goldy suggests that demographic changes will result in the destruction of the GOP:

As a whole, minorities vote majority Democrat, while whites vote majority Republican. As America nears white-minority status, either the Republican Party will go the way of the dodo or it will become a shell of its former self … focusing squarely on gaining political points among ‘New America’s’ minority-majority electorate.

At another point in the video Goldy suggests that white Christians are being “replaced,” claiming that “unfettered immigration is rapidly shifting the ethnic and political balance of the U.S.” and asking, “What happens when people give up on democracy because their democratic autonomy has been undermined by a bipartisan political effort to have their votes and voices replaced.”

And, of course, it wouldn’t be white supremacy without claiming that the Civil War was really about “states’ rights” and not slavery. 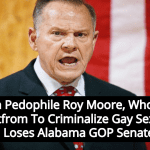 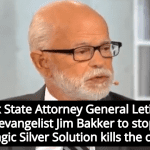 March 5, 2020 N.Y. Orders Televangelist Bakker To Stop Claiming Silver Solution Kills Coronavirus
Recent Comments
0 | Leave a Comment
"And JC said, starve the little chidren, for as much as you do it unto ..."
David Cromie Fox News Guest: Children Don’t Deserve ..."
""....are there no work houses....""
Erik1986 Fox News Guest: Children Don’t Deserve ..."
"Tsarist Russia was anything but a free market, and neither was the aristocratic system in ..."
Person223 Fox News Guest: Children Don’t Deserve ..."
"The right of males to reproduce, rendering a woman's reproductive organs chattel, disregarding the whole ..."
Anon E Moss New Legislation In Tennessee Would Allow ..."
Browse Our Archives
get the latest from
Nonreligious
Sign up for our newsletter
POPULAR AT PATHEOS Nonreligious
1