Barbara talks to God: Despite the dangers of the coronavirus pandemic, Hobby Lobby owner David Green refuses to close his chain of arts and crafts stores because his wife Barbara had a vision from God.

In a letter to store managers Green ordered his employees to keep working and keep the stores open because his wife Barbara, a “prayer warrior,” received a message from God. In the letter dated March 19 Green writes:

In my family, Barbara is the prayer warrior. Today, that title takes on such a different meaning than I ever imagined before because we are at war with this latest virus…

In her quiet prayer time this past week, the Lord put on Barbara’s heart three profound words to remind us that He’s in control. Guide, Guard, and Groom. We serve a God who will Guide us through this storm, who will Guard us as we travel to places never seen before, and who, as a result of this experience, will Groom us to be better than we could have ever thought possible before now.

Hobby Lobby owner David Green is telling store managers to stay open despite the pandemic because his wife had a vision from god.

He also warns they’ll all have to “tighten their belts” soon. His net worth is $6.4 billion—hourly employees don’t get paid sick leave. #COVIDIOT pic.twitter.com/4pEhivDbNy

In other words, Green, who has an estimated net worth of $6 billion, is asking his employees to risk their lives for $10 an hour because his wife thinks she can talk to God.

The arrogance, the callous cruelty, the staggering stupidity, is simply despicable.

The following are some of the reactions on social media to Green’s cruel and callous letter:

I’m sure Hobby Lobby employees will feel better about dying knowing the billionaire owner’s wife imagined that an invisible sky wizard told her it would be ok.

Hobby Lobby, closed Sundays to allow employees time for family and worship. Open during a pandemic because our morals aren’t really all that great. pic.twitter.com/zA4pbCkPcB

Please know that I like Hobby Lobby & it’s business values however I am saddened to see friends & their coworkers required to come to work during this time. Non-essential workers should not be working. Hobby Lobby certainly is NOT an essential place. @HobbyLobby #Coronavirus

Hobby Lobby’s owner is ordering stores to stay open bc he had a ‘vision from God.’ This is insane & cruel. But for saying that there are some who’ll say I’m being ‘hateful.’ Not him, for exposing workers/customers to illness but me for critiquing his “sincere religious belief”

Instead—he pays his cashiers $10/hr, denies them paid sick leave, is warning they’ll have to ‘tighten their belts,’ & is making them work during #Covid_19�

Previously Hobby Lobby made headlines after winning a Supreme Court decision allowing the craft store to opt out of the contraceptive mandate of the Affordable Care Act. The decision was a dangerous and disastrous move that elevates conservative Christian dogma above the law, helping to pave the way for a Christian theocracy.

Bottom line: Placing the lives of his employees and their families at risk, Hobby Lobby owner David Green refuses to close his chain of arts and crafts stores because his wife Barbara had a vision from God. 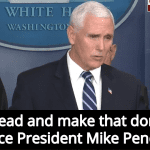 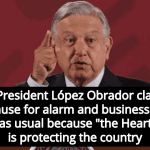 March 23, 2020 Mexico's President Believes ‘Heart Of Jesus’ Will Protect Country From Coronavirus
Recent Comments
0 | Leave a Comment
Browse Our Archives
get the latest from
Nonreligious
Sign up for our newsletter
POPULAR AT PATHEOS Nonreligious
1