Coronavirus Denial: Mexico’s President Andres Manuel Lopez Obrador claims the coronavirus pandemic is no cause for alarm because “the Heart of Jesus” will protect his country.

In an alarming development the president refuses to acknowledge the severity of the crisis, encouraging citizens to continue to go out and patronize restaurants and other businesses while also insisting that the country is safe because “the heart of Jesus” is with him and the country.

President Andres Manuel Lopez Obrador says there is no cause for alarm, and is continuing to hold regular public rallies around Mexico. He argues the country must keep going to limit damage to the economy lest it hurt the poor and the elderly.

But it is the president’s personal attitude that has Mexicans puzzled. He continues to attend mass public rallies, shaking hands and kissing babies. Asked how he was protecting Mexico, López Obrador removed two religious amulets from his wallet and proudly showed them off.

Reading off the inscription from his magic amulet López Obrador said:

The protective shield is the ‘Get thee behind me, Satan. Stop, enemy, for the Heart of Jesus is with me.’

That’s right, when asked how he was protecting Mexico, López Obrador said he was depending on “the Heart of Jesus” to protect the country.

Here is the part that is worrisome: at his morning press conference earlier this week, President López Obrador dug out his prayer card, a $2 bill given to him by a migrant and a four-leaf clover given to him by a supporter. He held them up for journalists and the world to see, and referred to the items as the “bodyguards” that would protect him. He also said he possessed a protective shield of honesty and called on Jesus Christ and religion for strength. These words are jarring for a country accustomed to political leaders — especially in the executive branch — respecting the separation of church and state.

However, despite concerns from experts and others, López Obrador “refuses to follow and call for social distancing measures. Pictures reveal him embracing and shaking hands of countless supporters, and holding rallies and gatherings for his adoring public.”

In a video released Friday the president declared:

If I was worried, if things were out of control, I would tell you, because I always tell the truth. But that’s not how things are.

Bottom line: When asked how he was protecting the country, Mexico’s President López Obrador said he was depending on “the Heart of Jesus” to protect his country from the global coronavirus pandemic. 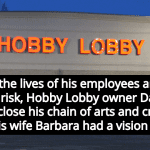 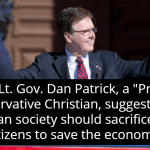