More Of This Please: Astrophysicist and leading science educator Neil deGrasse Tyson warns that COVID-19, the novel coronavirus currently sweeping the globe, is a problem that must be “guided by science and not by magical thinking.”

Like an invasion of hostile space aliens, COVID-19 Is an enemy of the human species that won’t negotiate. It cares not of your nationality, ideology, politics, or religion. This enemy of us all requires a global effort to combat, guided by science and not by magical thinking.

Like an invasion of hostile space aliens, COVID-19 Is an enemy of the human species that won’t negotiate. It cares not of your nationality, ideology, politics, or religion. This enemy of us all requires a global effort to combat, guided by science and not by magical thinking. pic.twitter.com/ir50k21Fbd

Tyson is right. No matter what those deluded by religious superstition might claim, magical thinking will not stop or prevent the spread of coronavirus. Yet despite what should be common sense, many religious people continue to look towards magical thinking instead of science for relief.

For example, in a disastrous public health move, the Greek Orthodox Church has issued an official statement declaring that the coronavirus is not transmitted via communion.

While Christian Prophet Cindy Jacobs declares that the coronavirus “will cease worldwide” because the virus is now “illegal” in the name of Jesus.

And more recently, Televangelist Kenneth Copeland claims he can cure coronavirus if his viewers touch his oily hand through their television set during his televised ministry.

As for Tyson, this is not the first time the leading scientist has warned against magical thinking and the danger of scientific illiteracy.

In 2017, speaking to a nearly sold-out crowd at the Greensboro Coliseum in Greensboro, North Carolina, Tyson addressed the current crisis in scientific literacy that plagues the U.S., warning that scientific illiteracy is a threat to the nation.

Tyson told the audience that “Americans overall are bad at science,” while warning that the consequences of science illiteracy could be devastating:

Americans overall are bad at science. Scared of math. Poor at physics and engineering. Resistant to evolution. This science illiteracy is a threat to the nation.

The consequence of that is that you breed a generation of people who do not know what science is nor how and why it works. You have mortgaged the future financial security of your nation. Innovations in science and technology are the (basis) of tomorrow’s economy.

In his remarks, Tyson compared the U.S. to the Middle East a 1,000 years ago, noting:

Just look back 1,000 years ago at the Middle East, where math and science flourished in Baghdad. Algebra and algorithms were invented in the Middle East. So were Arabic numerals, the numbers we still use today.

But when a new cleric emerged during the 12th century, he declared math and science to be earthly pursuits, and good Muslims should be concerned about spiritual affairs. The scientists drifted away, and scientific literacy faded from that part of the world. Of 655 Nobel Prizes awarded in the sciences since 1900, only three have been awarded to Muslims.

At the time Tyson warned:

Things that seem harmless can have devastating effects.

Indeed, often religious superstition seems harmless, yet in the age of coronavirus it is clear that those supposedly harmless beliefs can have devastating consequences.

Bottom line: Astrophysicist and leading science educator Neil deGrasse Tyson warns that the coronavirus “requires a global effort to combat, guided by science and not by magical thinking.”

Neil deGrasse Tyson, acclaimed astrophysicist and director of the Hayden Planetarium at the American Museum of Natural History, is a science communicator and the author of numerous books, including such bestsellers as Death by Black Hole: And Other Cosmic Quandaries, and Astrophysics for People in a Hurry. 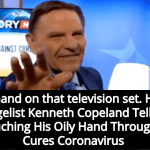 March 12, 2020
Televangelist Copeland Claims He Can Cure Coronavirus Via Television
Next Post 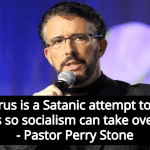