After being sentenced to 40 months in prison for crimes that include obstruction of justice, lying to Congress, and witness tampering, longtime Trump associate Roger Stone declared that his only fear in life is “not being right with God.” adding that he “feels pretty good” because he has “taken Jesus Christ” as his “personal savior.”

Speaking with “Axios on HBO” in his first on-camera interview since his sentencing, Stone said:

The only fear I have is not being right with God…

I feel pretty good because I’ve taken Jesus Christ as my personal savior. And it’s given me enormous strength and solace, because he knows what’s in my heart.

Christians believe deeply in redemption. So it’s not whether you’ve sinned. … It’s what’s in your heart today — where you stand with God today.

I think Trump has been forgiven for anything he did wrong. I think we all have. And I think he’s a different person. I think he is steadfast in his faith. I don’t think he could do this job if he was not.

Stone’s ploy with this bullshit, rather obviously, is to get more Trump World evangelicals to pressure their Glorious Leader for a pardon.

Just like Trump, Stone is playing the God card to gain sympathy from gullible evangelicals. Neither of them has really changed. They just want “Get Out of Jail Free” cards, which—sadly—evangelicals are all too willing to hand out to anyone these days.

“I feel pretty good because I’ve taken Jesus Christ as my personal savior.”

— Roger Stone in his first interview since sentencing. pic.twitter.com/ZEg0WhzsdY 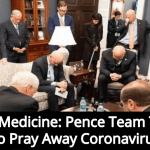 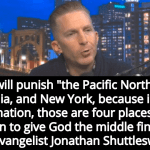