Trump: Next Presidential Election ‘One Of The Biggest Dates In The History Of Religion’

Trump: Next Presidential Election ‘One Of The Biggest Dates In The History Of Religion’ March 25, 2020 Michael Stone

Thoughts and Prayers: President Donald Trump asks conservative pastors to pray for his reelection, calling  Nov. 3 “one of the biggest dates in the history of religion.”

Speaking “to hundreds of pastors last Friday on a call organized by the Family Research Council about the COVID-19 coronavirus pandemic,” Trump bragged about his accomplishments, both real and imagined, while asking the group of conservative pastors to pray for him because the next election would be “one of the biggest dates in the history of religion.”

I want to thank you all for praying for our country and for those who are sick. You do such an incredible job. You’re very inspirational people. And I’m with you all the way. You know that. You see what we’ve done for right to life and all of the things that we’ve been working so hard together. I’ve been working with many of the people on the call. Many, many of the people. We’ve had tremendous support. But we are going to get over this.

We have a very, very big election coming up, especially if you’re evangelical—if you’re evangelical, if you’re Christian, if you’re, frankly, almost any faith. And I guess probably you could go any faith, Tony, if you think about it. But we have a very important election coming up. We have people on the other side that are against a lot of the things we all stand for. And you know one of the things I’m most proud of is knocking out the Johnson Amendment, where the people that we most respect, namely the people on this line, you weren’t able to speak your will, speak what you thought, speak about where you stand politically, what’s good for the church, what’s good for all of the things that we represent. And we knocked out the Johnson Amendment. They would have held you very horribly responsible if they wanted to, and they did in some cases. What they did to the people that we want to hear from, and people that your people want to hear from, so importantly. So, we’re able to do that and many other things. And so, it’s just going to be, it’s a big date, Nov. 3—that’s going to be one of the biggest dates in the history of religion, as far as I’m concerned. So, I want you to be, we have to keep aware of that, ‘cause as we fight this, people are forgetting about anything else. You turn on the news, and all you see is the coronavirus or whatever—some people call it the Chinese virus, they call it a lot of different things—but the virus, that’s all you see. You don’t see anything else.

So people are forgetting we have the most important election that we’ve had, and I guess when I say the 2016 election, perhaps that’ll always be very special for all of us, but without this one, without a victory here, so much of that can disappear.

It’s my honor, and I am with you all the way. We have a lot of things to save, a lot of things to keep that we—we’ve had a lot of victories in the last three and a half years, more victories than anybody would have believed possible. And the other side is not happy about it, so we have to fight very hard.

After Perkins asked Trump how pastors should pray for him, Trump replied:

Well, I think the health of our country, the strength of our country. We were doing something amazing and then one day, it just ended. So that would be it, and the fact that we make the right choice on Nov. 3 is very important. Tony, you understand that better than most.

Bottom line: Trump asks conservative pastors to pray for his reelection, calling  Nov. 3 “one of the biggest dates in the history of religion.” 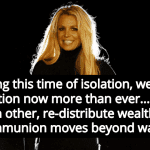 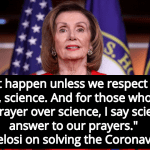 March 26, 2020 Nancy Pelosi On Coronavirus Pandemic: We Won’t Succeed ‘Unless We Respect Science’
Recent Comments
0 | Leave a Comment
"And JC said, starve the little chidren, for as much as you do it unto ..."
David Cromie Fox News Guest: Children Don’t Deserve ..."
""....are there no work houses....""
Erik1986 Fox News Guest: Children Don’t Deserve ..."
"Tsarist Russia was anything but a free market, and neither was the aristocratic system in ..."
Person223 Fox News Guest: Children Don’t Deserve ..."
"The right of males to reproduce, rendering a woman's reproductive organs chattel, disregarding the whole ..."
Anon E Moss New Legislation In Tennessee Would Allow ..."
Browse Our Archives
get the latest from
Nonreligious
Sign up for our newsletter
POPULAR AT PATHEOS Nonreligious
1