A crowd of protesters, some armed with rifles, entered the state Capitol Thursday, demanding to be let into a legislative chamber as lawmakers deliberated an extension of the state’s emergency declaration.

Images and videos posted to social media showed the mob of several dozen ignoring social distancing guidelines as they entered the building, with many not wearing masks. In addition to weapons, some protesters came armed with swastika signage and Confederate flags.

Armed protesters chanted “Let us in,” while some carried signs advocating violence. One sign attached to a truck outside the Capitol said: “Make treason punishable by hanging.” Another prominent sign said: “Tyrants get the rope.”

Many of the demonstrators inside the Capitol openly carried firearms, causing some rightfully nervous lawmakers to put on bulletproof vests:

Directly above me, men with rifles yelling at us. Some of my colleagues who own bullet proof vests are wearing them. I have never appreciated our Sergeants-at-Arms more than today. #mileg pic.twitter.com/voOZpPYWOs

These folks are a small minority of people who are vocally opposed the governor’s stay at home executive order. Although, their message is muddled with inflammatory language like ‘tyrants get your rope’ and images of swastikas and confederate flags.

The following is some of the reactions and reports via Twitter:

This is America in the age of Trump. pic.twitter.com/tLWR2bvjtR

Are we are likely hours if not minutes from Trump calling these angry white “protestors” armed with semi-automatic guns, and no masks or social distancing, very fine people and offering his support. #MichiganProtest

At what point can we call the armed, non-PPE-wearing “protesters” that stormed the Michigan Capitol terrorists? #MichiganProtest pic.twitter.com/1L2M528vbM

These are vigilantes who as a country we have deemed somehow deserve to have highly dangerous weapons. What the hell are we doing. #MichiganProtest pic.twitter.com/CU3Xqx5TS7 https://t.co/k18fTWDGgK

A bunch of armed gunmen inside the Michigan State Capitol building are nothing less than TERRORISTS.

Whatever you have to say WITH a gun, you can say it much better without a gun. #MichiganProtest https://t.co/11jV0UTzlW

#MichiganProtest Heavily armed people storming a government building is an attack, not a protest. It is at the very least an act of intimidation, if not terrorism.

If you think storming a government building, especially a capital or legislative building, dressed in paramilitary garb, armed to the teeth is anything other than political terrorism you are very, very wrong. This is not a #MichiganProtest, it is sedition. 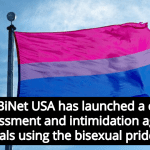 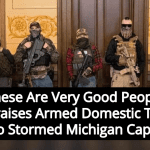 May 1, 2020 Trump: Domestic Terrorists Who Stormed Michigan Capitol ‘Are Very Good People’
Recent Comments
0 | Leave a Comment
"Accept or don't accept the sites I provided. That is your choice. Christian sites are ..."
Mark Bradshaw Ana Kasparian’s Glorious Rant On Christianity ..."
"Any chance you could reference an actual scholarly site, I am not about to accept ..."
Kit Hadley-Day Ana Kasparian’s Glorious Rant On Christianity ..."
"Ohhh the scary "they". And who, exactly, are "they"? Wait, let me guess, it's the ..."
alverant Fox News Host Bill Hemmer Warns ..."
""Yes it does" ----- NO, it does NOT. In NO place in the Bible does ..."
Mark Bradshaw Ana Kasparian’s Glorious Rant On Christianity ..."
Browse Our Archives
get the latest from
Progressive Secular Humanist
Sign up for our newsletter
POPULAR AT PATHEOS Nonreligious
1