Idaho state Rep. Heather Scott has suggested workers deemed “nonessential” during the COVID-19 pandemic are being treated like Jews during the Holocaust.

Scott, a Republican whose district includes Bonner County, compared Gov. Brad Little’s shutdown orders to Nazi Germany during an hourlong Zoom interview with Jess Fields, a Houston-based podcast host, that was posted online Thursday. She referred to the governor as “Little Hitler” and questioned his authority to decide who can and can’t continue working during the pandemic.

A North Idaho representative recently compared the temporary shutdown of nonessential businesses to Jewish people in the Holocaust who were sent to concentration camps.

District 1 Republican Representative Heather Scott made the comments in at least two recorded interviews this month with hosts of podcasts and other shows posted to YouTube.

It makes my heart heavy to hear a comment from an elected official that shows such deep disregard and lack of respect for what the Jewish people experienced during the time of the Holocaust. It also shows an extreme ignorance of history.

Her words will be especially hard for members of our community whose own relatives were put on those trains. Not to mention the few Holocaust survivors we are still privileged to have living among us.

Writing for The Spokesman-Review, Chad Sokol reports on Scott’s nefarious past:

Scott is no stranger to controversy. During a 2015 campaign rally, she posed with a Confederate flag. In 2017, she defended white nationalism on her Facebook page. Later that year, in an open legislative session, she accused another female lawmaker of offering sexual favors to gain a seat on a House committee. And she recently sponsored a bill to remove some requirements to report domestic and child abuse. 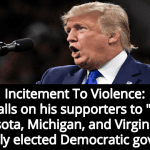 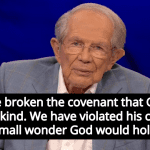 April 20, 2020 Pat Robertson: God’s Punishing Us With COVID-19 Because Gay Marriage And Abortion
Recent Comments
0 | Leave a Comment
Browse Our Archives
Follow Us!