Extortion: BiNet USA, a sleazy and relatively unknown internet group, has launched a campaign of harassment and intimidation against bisexuals using the bisexual pride flag.

They were supposed to represent and lift up bisexual people; instead, in a despicable attempt at extortion, they are now claiming they own the bisexual pride flag, and demanding payment from bisexual content creators and others using the pride flag in their designs.

The organization BiNet USA is demanding payment for use of the bisexual pride flag – the pink, purple, and blue striped banner common at LGBTQ Prides all over the world.

We at BiNet USA are asking you to get in touch so we can discuss your use of the bisexual pride flag without any money going to our organization. Thank you for removing the flag from your site, socials or work. We know this is a lot so we hope we can work a new deal. 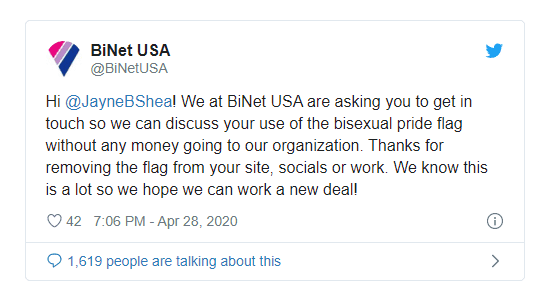 The demands are ludicrous, and reflect an unbridled greed coupled with a profound ignorance and disrespect for those they supposedly represent.

BiNet USA’s claim that they now own all rights to the bisexual pride flag – the pink, purple, and blue striped banner common at LGBTQ Prides all over the world – is simply absurd, and infuriating.

For the record, BiNet USA does not own the copyright to the Bisexual Pride Flag.  Wikimedia Commons reports:

This image of simple geometry is ineligible for copyright and therefore in the public domain, because it consists entirely of information that is common property and contains no original authorship.

On twitter, the group has found only anger and condemnation for their attempt to extort content creators using the bisexual pride flag:

Y’all have any registered copyright proof to accompany this empty legal threat against literally the entire global #LGBTQ community as we all collectively drag your greedy asses for harassing folks during a pandemic?

I don’t understand what you hope to gain @BiNetUSA from your current endeavour regarding the Bi flag and who will benefit other than yourselves if you are successful.
Today I see Bisexual people around the globe being visible and standing in solidarity with one another#ourbiflag https://t.co/FExPQPGgCL

“The bisexual pride flag has been used for over two decades and it has become, for many, a symbol of great power and importance. To try and control that and take ownership of it after all of that time, is simply unethical.”

Bottom line: In a despicable attempt at extortion, BiNet USA, a sleazy and relatively unknown internet group, launched a campaign of harassment and intimidation against bisexuals using the bisexual pride flag.

Update: After the outrage, BiNet USA has deleted their Twitter account. No report if they will continue their campaign of harassment and intimidation in an attempt to extort content creators for using the bisexual pride flag. 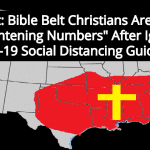 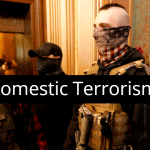