Good News: Kentucky Governor Andy Beshear has announced a mandatory quarantine for anyone attending any mass gathering this weekend, including Easter church services.

Beshear says that state police will be used to record the license plate information of people seen attending mass gatherings.

Kentucky Gov. Andy Beshear implored residents to avoid gathering this weekend for the Easter holiday, warning that anyone who violates the state’s stay-at-home order will be subject to a 14-day mandatory self-quarantine.

Beshear said the state will record license plate information of people seen attending mass gatherings and turn that information over to local public health officials. Quarantine notices will then be delivered in person.

If you’re going to expose yourself to this virus, and you make that decision to do it, it’s not fair to everybody else out there that you might spread it to. This is just an example of personal responsibility. We’re going to make sure that those that are going, and get noticed, that this will happen, that if they’re going to participate in the mass gathering, it’s 14 days, self-quarantined, at their home.

Somebody makes that decision, okay. But understand that this is the only way that we can ensure that your decision doesn’t kill somebody else.

Watch the video below, relevant remarks begin around the 37:10 mark –

This is good news, and Beshear should be applauded for taking a strong stand in defense of public health. However, as one might expect, some conservatives are lashing out after the announcement.

Folks, I tried to warn religious leaders that this was going to happen. If you give an inch the godless leftists will shut down your churches, threaten to arrest your preachers, and quarantine your congregation.

Taking license plates at church? Quarantining someone for being Christian on Easter Sunday? Someone needs to take a step back here.

Kentucky Governor Announces Plan to Record License Plates of Easter Church Goers and Force Them to Quarantine for 14 Days https://t.co/z7U42liQRh

Taking license plates at church? Quarantining someone for being Christian on Easter Sunday? Someone needs to take a step back here.

For the record, “godless heathen Democrats” like Governor Beshear will save lives by understanding and respecting the science, and acting accordingly. Full stop.

Bottom line: Kentucky Governor Andy Beshear has announced a mandatory quarantine for anyone attending any mass gathering this weekend, including Easter church services. 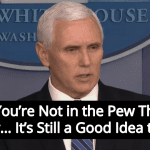 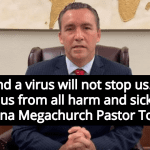 April 11, 2020 Danger: Louisiana Megachurch Expecting 2,000 People For Easter Services
Recent Comments
0 | Leave a Comment
Browse Our Archives
get the latest from
Progressive Secular Humanist
Sign up for our newsletter
POPULAR AT PATHEOS Nonreligious
1