Cuomo, speaking with CNN’s Alisyn Camerota about the current coronavirus pandemic, and how he plans to move forward, said:

Look, anyone who tells you, Alisyn, ‘I know what comes next,’ doesn’t even understand the question, let alone have the answer. Nobody has been here before, this is totally unchartered territory. And you’re right, you have different peaks of that curve in different areas, so we’re not talking about the next two weeks or three weeks, we’re talking about months, we’re talking about a phase to reopening, and the safe reopening. We’re talking about a reopening that has a public health plan and an economic plan totally coordinated. Our behavior has stopped the spread of the virus. God did not stop the spread of the virus. And what we do, how we act, will dictate how that virus spreads.

We changed the trajectory of the virus by our actions. And that’s the real important lesson to me.

Cuomo cautioned that easing COVID-19 restrictions too soon could have potentially disastrous results:

I want to get out of the house, trust me. Everybody does. But if you move too quickly and not smartly, you will see the numbers go right back up again and you’ll have to do another lock-down. The federal government has to be realistic about this. You can’t just wish it and then it is so.

Watch the video below – relevant remarks begin at the 1:11 mark:

Yesterday, speaking during a press briefing about the number of people infected with the virus, the governor said something similar, declaring:

While many had no problem with Cuomo’s refreshing honesty concerning the impotence of an imaginary God, some were disturbed by Cuomo’s honesty. For example:

Cuomo Is making a critical mistake here mocking God. This is the same guy who lit up one world trade center to celebrate the passing of a no-restriction/ partial birth abortion law and they literally celebrated with balloons. NYC Will likely suffer a catastrophic judgement soon https://t.co/B4frvO8UE7

So Cuomo was thanking himself for bringing the number of COVID19 cases down in NY.

The DEMS really do hate God!
No wonder they closed Churches!

#Patriots #WWG1WGA #QAnon @realDonaldTrump Let’s Show Cuomo what the wrath of God can do. Since he basically says he is above God. Link is the briefing he had. Where he says God and faith have nothing to do with it.https://t.co/DB540uoNN8

Just watched Gov Andrew Cuomo say, “WE brought the numbers down, God didn’t do it!” When men have no fear of God they say arrogant things like that. 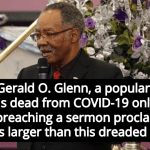 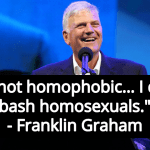