Despicable: Trying to distract from his failure in leadership during the COVID-19 crisis, Trump is scapegoating the World Health Organization (WHO) and diverting their funding to Franklin Graham’s Samaritan’s Purse, an anti-gay conservative Christian hate group.

The White House budget office has told federal agencies to redirect World Health Organization funds to groups that do similar work, indicating a 60-day suspension of WHO funding ordered by President Trump will be permanent.

Adding insult to injury, the anti-gay conservative Christian organization demands that all employees and volunteers adhere to their “statement of faith” which entails an explicitly anti-gay agenda.

According to the group’s website, all volunteers, including health care workers, should read and adhere to a statement of faith, in which marriage is defined as “exclusively the union of one genetic male and one genetic female” and the unrighteous are sentenced to “everlasting punishment in hell.”

That’s right, everyone who volunteers or works for Samaritan Purse must pinky swear that they believe that sinners go to Hell and gays can’t get married because it’s Adam and Eve, not Adam and Steve.

Gothamist reports that Graham has “a track record of using humanitarian missions to proselytize an evangelical agenda,” while Progressive Secular Humanist has reported frequently on Graham’s bigotry and hatred towards gays and others.

In fact, The New York Times once described Samaritan’s Purse as an “American evangelical relief group that is using private donations and United States government money to help victims of two earthquakes,” noting that the group “has blurred the line between church and state as its volunteers preach, pray and seek converts among people desperate for help.”

Let’s be clear about Trump’s motives. To improve his reelection chances, he’s scapegoating WHO and is rewarding his most ardent evangelical supporters, like Franklin Graham, for literally demonizing opponents. This is a dangerous quid-pro-quo involving hundreds of millions of dollars in government funding and, more importantly, thousands of American lives.

If Samaritan’s Purse is put even partially in charge of our country’s coronavirus response efforts, countless Americans will die. Time and time again, Samaritan’s Purse has prioritized religious dogma and discrimination over medical science—and over life itself. We can’t allow them to get their hands on hundreds of millions of dollars in WHO funding to expand their dangerous influence.

Late last month Progressive Secular Humanist reported that volunteers for the coronavirus field hospital in Central Park that is being run by Samaritan’s Purse must agree to a “statement of faith” declaring that sinners go to Hell and gays can’t get married. 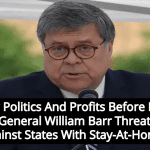 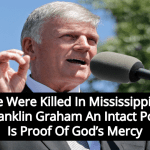