Christian Activist Calls For Violence Against Those Who Use Pandemic To Impose Socialism May 4, 2020 Michael Stone

How many socialists would Jesus kill? Christian activist Scott Lively warns his fellow conservative Christians that they must prepare to wage a violent revolution against those who would use the coronavirus pandemic to impose socialism.

Trump loving radical right-wing activist Scott Lively warned listeners during an online Bible study yesterday that they need to establish a modern-day Underground Railroad for Christians to escape coming persecution and prepare to wage a violent revolution against those who seek to use the current COVID-19 pandemic to impose a socialist End Times “emerging Beast government” on the United States.

Lively, speaking during an online Bible study, said that Christians must start planning a violent revolution against the coming socialist government:

We need to be establishing a network of believers everywhere that can operate in an underground fashion. Because if this thing continues in the trend that it seems to be, we may be evolving here at a revolutionary speed [and] entering into an emerging Beast government.

We’re going to need to have something like an Underground Railroad in which believers who are fleeing persecution are going to be able to have some way of escape.

If these people truly are intending to destroy America, so they can bring in their global socialist system, or even a nationalist socialist system, then violence is appropriate in response in the most measured possible way. That’s the idea. If at all possible, you disarm the zombies trying to kill you without hurting them.

But if it’s not possible, you do whatever is necessary to stop them from killing you and your family or putting you into slavery. That I believe is the duty of an American.

Lively is a leading figure in the global conservative Christian movement against LGBT people. He is the president of Abiding Truth Ministries, and author of The Pink Swastika, an ugly, anti-gay polemic that draws a false connection between homosexuality and the rise of Nazi Germany.

In addition to his work promoting hatred against LGBT people, the conservative Christian also ran for Governor of Massachusetts in the 2014 and 2018. Both times he lost. 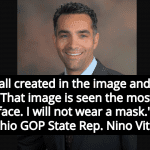 May 4, 2020
Ohio Lawmaker Refuses To Wear Face Mask Because God Doesn’t Wear One
Next Post 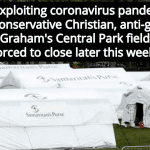 May 5, 2020 Franklin Graham’s Central Park Field Hospital Will Close After Complaints, Protests
Recent Comments
0 | Leave a Comment
Browse Our Archives
get the latest from
Nonreligious
Sign up for our newsletter
POPULAR AT PATHEOS Nonreligious
1