Bootlicker: Senator Lindsey Graham praises Trump’s response to the coronavirus pandemic, claiming that Trump is “pro-life in the real sense of the word.”

Lindsey Graham praised Donald Trump’s pandemic response because of its “pro-life” foundation. Maybe he meant some other Donald Trump?

Graham paid homage to his Dear Leader, President Donald Trump, while appearing on Tuesday’s episode of “Washington Watch with Tony Perkins.” Speaking about the virus, and Trump’s response, Graham said:

I believe if we’d let it run its course, Tony, you’d have a couple million people dead right now. Look, 70,000 people [have] died with us locking the whole world down, so the president put life—he is pro-life in the real sense of the word—he put life ahead of his economic success.

The economy came to a grinding halt—not because of anything bad about the economy—to save lives. Now we’re trying to balance how to turn it on. I think he’s done a really good job.

Reporting on the story, Right Wing Watch notes that Trump’s response is probably not as “pro-life” as Graham would like people to think:

Trump has repeatedly suggested that reopening the nation’s economy will result in more Americans dying from ​the coronavirus​, ​but he has continued to push for ​states to ease lockdown restrictions and businesses to reopen​ anyway.

For many observers, it’s hard to miss the fact that Trump is not prioritizing American lives over other considerations; he’s doing the opposite. At one event this week, the president argued, for example, “The people of our country are warriors…. I’m not saying anything is perfect. And, yes, will some people be affected? Yes. Will some people be affected badly? Yes. But we have to get our country open.

Indeed, the idea that Trump, or any Republican for that matter, is “pro-life,” seems a bit far fetched at this point.  Writing for The Washington Post about the hypocrisy of Republicans claiming to be “pro-life” in the age of coronavirus, Jennifer Rubin notes:

They think human beings, post-birth, are expendable because of inconvenience (who wants to sit home?), personal liberty (stop telling me what to do!) and economics (we cannot afford the burden).

The fact is, once Republicans are faced with any inconvenience whatsoever, they are willing to let people die to preserve the stock market and corporate profits.

In short, for years Republicans claimed they were the party of family, the “pro-life” party that asserted all human life is sacred; however, the coronavirus crisis shows that Republicans care more about the economy and personal convenience than preserving human life. Trump is simply a grotesque reflection of this truth.

Bottom line: Senator Lindsey Graham praises Trump’s response to the coronavirus pandemic, claiming that Trump is “pro-life in the real sense of the word.” 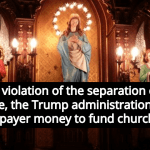 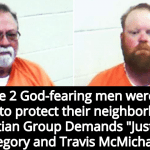 May 8, 2020 Christian Group Defends ‘2 God Fearing Men’ Who Killed Ahmaud Arbery
Recent Comments
0 | Leave a Comment
Browse Our Archives
get the latest from
Progressive Secular Humanist
Sign up for our newsletter
POPULAR AT PATHEOS Nonreligious
1