Megachurch Pastor Who Claimed He Could Cure COVID-19 Dies From Virus May 18, 2020 Michael Stone

Irony: Franklin Ndifor, a popular megachurch pastor and politician in Cameroon, is dead from COVID-19 only days after he “laid hands” on hundreds of followers while claiming that he could cure the virus.

Pastor Franklin Ndifor, founder of the Kingship ministry church based in Bonaberi in the fourth district of Douala, died on Saturday of the Covid-19.

Panic has gripped several hundred people after a popular Cameroon pastor and candidate in the central African state’s last presidential election, Frankline Ndifor, died of COVID-19 following his prayers that hundreds of his supporters cured of the coronavirus. Cameroon police used force to gain access to his residence in the economic capital city Douala, as some of his supporters blocked entrances, praying for his resurrection.

A popular Cameroonian pastor has died less than a week after being diagnosed with Covid-19, leaving hundreds of his supporters panicked after the man had laid hands on them in an effort to “cure” them of the infection.

According to reports, after the death was announced hundreds of Ndifor’s followers surrounded the pastor’s house while praying for a “resurrection.” Eventually police had to use force to break up the crowds and remove the body for burial.

Commenting on the story, one of Ndifor’s followers, Rigobert Che said:

This is a pastor that has been laying hands [on the sick] and claiming that he cures COVID-19. If you, the person that claims that you are curing COVID-19, you are dead, what about the fellow people that were affected by the COVID-19? Now that he is dead, I do not know how the people that he was laying hands on will be healed.

The tweet below shows followers praying for a “resurrection” after Ndifor’s death:

#Cameroon After resisting since Saturday morning, Police forced their way in the residence of Prophet Ndifor Franklin, took his corpse to Koto Bass Cemetery in Bonaberi at about 7:15 pm. Family had pleaded that they wanted to pray and resurrect the 2018 Presnt election candidate pic.twitter.com/cTFmY5HuQm

The Family of Prophet Franklin Ndifor just confirmed he is dead. All attempts to restore him back to life through prayers were unsuccessful.

Christians and followers of Late Prophet Franklin Ndifor Afanwi pray for the resurrection of the Man of God pic.twitter.com/JNSPFdRZkA

Bottom line: Franklin Ndifor, a popular megachurch pastor and politician in Cameroon, is dead from COVID-19 only days after he “laid hands” on hundreds of followers while claiming that he could cure the virus. 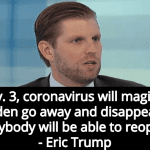 May 17, 2020
Eric Trump: Coronavirus Is Political Hoax That Will ‘Magically’ Disappear
Next Post 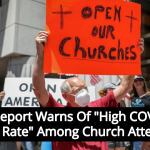