Education Secretary Betsy DeVos is using the $2 trillion coronavirus stabilization law to throw a lifeline to education sectors she has long championed, directing millions of federal dollars intended primarily for public schools and colleges to private and religious schools.

In March, Congress passed the CARES Act to provide relief and recovery to individuals, the economy, and states and localities from the Covid-19 pandemic. Yet over the last several weeks, Secretary of Education Betsy DeVos has made two critical decisions that undermine the intent of this law. Instead, she is using the crisis to promote her long-standing anti-public education agenda of taking resources away from the 90 percent of students that attend public schools and directing them to private schools and private companies.

About $350 million of funding has reportedly been allocated to small colleges, many of which are private or religious, regardless of need.

DeVos has reportedly also used $180 million of the relief to encourage states to create “microgrants” that parents can use to pay for educational services, including private-school tuition.

In a statement, The National Coalition for Public Education denounced the scheme:

Public dollars should fund public schools. This scheme is no different than other attempts by this administration to divert federal funding to unaccountable private educational entities. Years of research tells us that private school voucher programs don’t improve student academic achievement and are unaccountable to taxpayers. Further, they fail to provide better educational opportunities for low-income students and also fail to provide effective services and protections for students with disabilities – two groups of students which the grant proposal singles out for higher priority. “If Secretary DeVos truly wants to help the most disadvantaged students across the country during this pandemic, the solution is to fund the public schools they attend rather than diverting taxpayer dollars to private school and for-profit programs that lack quality control, oversight, and accountability.

The proposed expansion under the CARES Act would fracture the quality and secular nature of our education system and leave students vulnerable to having their rights violated. Secretary DeVos has constantly sought chances to funnel federal money away from our public education system and toward private religious or parochial schools. To attempt this power grab during a national crisis is shameful.

Indeed, Betsy DeVos is a radical Christian extremist who wants to use American schools to advance “God’s kingdom.” She wants to destroy public education and use taxpayer money to fund private Christian schools, and she has no problem with private schools using taxpayer money to discriminate against gays and others who offend the sensibilities of conservative Christians.

Previously, an alarming report was released by a conservative Christian group with ties to DeVos advocating for the promotion of Christianity in public schools and putting an end to the Department of Education. 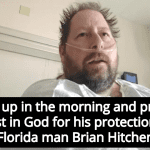 May 14, 2020
Florida Man Who Claimed God Would Protect Him Now Infected With COVID-19
Next Post 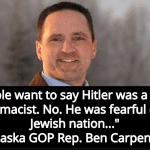