Pathetic: Cole Carini, a sexually frustrated incel (involuntary celibate), is under arrest after blowing off one of his hands in a failed terrorist plot targeting “hot cheereleaders.”

A 23-year-old Virginia man who appeared to be planning an incel bomb attack on “hot cheerleaders” accidentally blew off his hand with explosives, authorities say.

Cole Carini was charged in federal court on Friday connection with the plot after he allegedly lied to FBI agents by saying his extensive injuries were the result of a lawnmower accident.

A sexually frustrated Virginia man blew off a hand while trying to make homemade explosives — ones he planned to use on a revenge attack on “hot cheerleaders,” according to federal prosecutors.

According to reports, “Carini went to a Virginia hospital Tuesday with one hand amputated, several fingers missing from his other hand and shrapnel wounds to his neck and throat. The 23-year-old told police he said his injuries were due to an accident with his lawnmower.”

However, the grass at Carini’s house showed no evidence of mowing. Instead, investigators found a gruesome scene at Carini’s home, “with explosives materials, rusty nails, pipes and pieces of flesh,” according to prosecutors.

In addition to the scene of carnage found at the home, investigators also found a scorched letter written by Carini. The letter, parts of which were illegible, read:

He casually walked through the shopping mall, his jacket concealed deadly objects. He was doing it and was assured it must be done. Even if he died this statement was worth it! He had… of tension that would come and go as he approached the stage of hot cheerleaders… A dead seriousness sank in as he realized he was truly passing the point of no return! He decided I will not back down I will not be afraid of the consequences no matter what I will be heroic I will make a statement like Elliott Rodgers [sic] did he thought to himself.

The “Elliot Rodger” Carini cites in his letter is a hero in the incel community, after the sexually frustrated and criminally deranged young man killed six people and injured fourteen others on the evening of May 23, 2014, in what is known as the Isla Vista killings.

In fact, the Southern Poverty Law Center has described the incel subculture as “part of the online male supremacist ecosystem,” noting that self-described incels have committed at least four mass murders in North America.

Bottom line: Cole Carini, a sexually frustrated incel (involuntary celibate), is under arrest after blowing off one of his hands in a failed terrorist plot targeting “hot cheereleaders.” 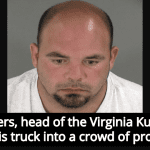 June 8, 2020 Head Of Virginia KKK Arrested After Plowing Truck Into Black Lives Matter Protesters
Recent Comments
0 | Leave a Comment
Browse Our Archives
get the latest from
Progressive Secular Humanist
Sign up for our newsletter
POPULAR AT PATHEOS Nonreligious
1