Petition For Change: An online petition asking the Department Of Homeland Security and Secretary of State Mike Pompeo to declare the KKK a terrorist organization has gathered over a million signatures.

An online petition demanding that the Ku Klux Klan be listed as a terrorist organization has gained more than one million signatures in just four days.

The Change.org petition is demanding that the white supremacist hate group be formally listed as a terrorist organization by the government.

Currently, the KKK are classified as a domestic extremist group as there is no definition for domestic terrorism organizations in the U.S.

Ever since the inception of the Ku Klux Klan in December 24,1865 they have terrorized American citizens for the color of their skin and opposing views. This group has a long history of murder & intimidation of people based on color and religion. The KKK has lynched 3446 blacks and 1297 whites based of the research of The Tuskeegee Institute. The KKK has raped,murdered people for registering to vote, and destroyed towns built by African Americans. Clear documented evidence is available through picture and video of their murderous acts. Black Americans have suffered the most under this terror group. Terrorism is the use of violence and intimidation in pursuit of political aims. We ask if ISIS or ISIL is labeled a terrorist group for their acts, then surely the KKK fit the clear description of a terrorist.

Currently the petition has close to 1.2 million signatures.

The petition notes the significance of religion, because for the KKK, the notion of religion has always been central. In fact, the KKK has always been about obeying “God’s law,” and restoring “America to a White Christian nation founded on God’s word.”

Indeed, historically, racism and white supremacy has been a central theme in American Christianity.

In fact, the Southern Baptist Convention, the largest Protestant body in the United States, was founded upon the notion that black slavery and white supremacy was integral to the Christian faith.

To their credit, the Southern Baptist Convention officially renounced their open racism and hostility towards black people in a statement titled “Resolution On Racial Reconciliation” issued in 1995 (Better late than never).

As for the KKK, they have always been a Christian organization. In fact, if you want to join the KKK, you must be a Christian. An in depth report from the Associated Press released last year notes:

Joining the Klan is as easy as filling out an online form – provided you’re white and Christian.

Our goal is to help restore America to a White Christian nation, founded on God’s word. This does not mean that we want to see anything bad happen to the darker races … we simply want to live separate from them … As GOD intended. (Lev.20:24-25)

To be sure, the reality is that most Christians today are not part of the KKK, and do not support the KKK. However, it is equally true that every member of the KKK is a Christian, and that racism and white supremacy is woven deep into the fabric of American Christianity.

Bottom line: An online petition asking the Department Of Homeland Security and Secretary of State Mike Pompeo to declare the KKK a terrorist organization has gathered over a million signatures. 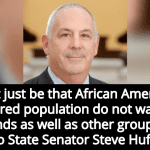 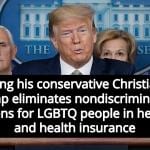