Who Would Jesus Infect? A large Pentecostal church in rural northeast Oregon has been linked to the state’s largest COVID-19 outbreak.

A church in rural northeastern Oregon is now the epicenter of the state’s largest coronavirus outbreak, as 236 people tested positive for the disease, authorities said Tuesday.

The largest outbreak, which was first made public Monday, is associated with Lighthouse Pentecostal Church in Union County.

A church in northeast Oregon has been linked to the state’s largest single coronavirus outbreak to date, authorities confirmed, pushing daily counts to reach new records.

The church held services in April and May, despite Gov. Kate Brown’s executive orders limiting gatherings, and recently held a wedding and a graduation ceremony with more than 100 people at each event.

But the church’s videos of services in April and the first half of May show dozens of parishioners gathered in the church parking lot around a central stage, ignoring the restriction on crowd sizes.

The video from the April 26 services shows church leaders and members engaged in the practice of the laying on of hands during prayer. Participants were close enough to rub shoulders and no one was wearing face coverings. The video of the May 6 services shows churchgoers side by side. Again, no one in the videos appear to be wearing face masks. During Mother’s Day, May 10, a pastor invited all the mothers in the audience to come forth for recognition. Numerous women lined up next to one another, only 2 or 3 feet apart at the most, and once more, no one wore a mask.

A video of a recent worship service, published on the church’s Facebook page on May 24 but since deleted, showed worshippers by the hundreds standing as closely together as was normal in pre-pandemic times as they sang, clapped and moved to the music. At that time, Union County was in Phase 1 of reopening, under which faith communities were not allowed to convene in large groups.

While the church has removed the video from their Facebook page, a copy of the video has been preserved via Twitter: 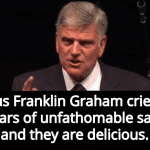 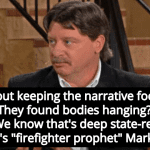 June 19, 2020 Christian ‘Prophet’ Claims Black Men Are Hanging Themselves To Prevent Trump’s Reelection
Recent Comments
0 | Leave a Comment
"My questions are: What are the education levels of these veterans? Where they radical right ..."
Charles Daniel Christopher Study: Nearly 1 In 5 Terrorists ..."
"It is in French :)"
Martin Penwald Study: Nearly 1 In 5 Terrorists ..."
"No, white supremacy is not a meaningless term. There is a very serious, although currently ..."
Doug1943 Tucker Carlson Is Not Happy About ..."
"You are conflating justification with causation, and racism, from which nearly everyone suffers, with white ..."
HematitePersuasion Tucker Carlson Is Not Happy About ..."
Browse Our Archives
get the latest from
Progressive Secular Humanist
Sign up for our newsletter
POPULAR AT PATHEOS Nonreligious
1