Tin Foil Hat Republican: Bexar County GOP Chair Cynthia Brehm is facing calls for her resignation after making the outrageous claim that the police killing of George Floyd was a “staged event” to damage the reelection of Donald Trump.

This time, though, Brehm appears to have outdone herself.

In a now-deleted Facebook post, the local GOP leader theorized that the death of George Floyd while in Minneapolis police custody might be a “staged event” meant to undermine President Donald Trump’s chances with black voters. 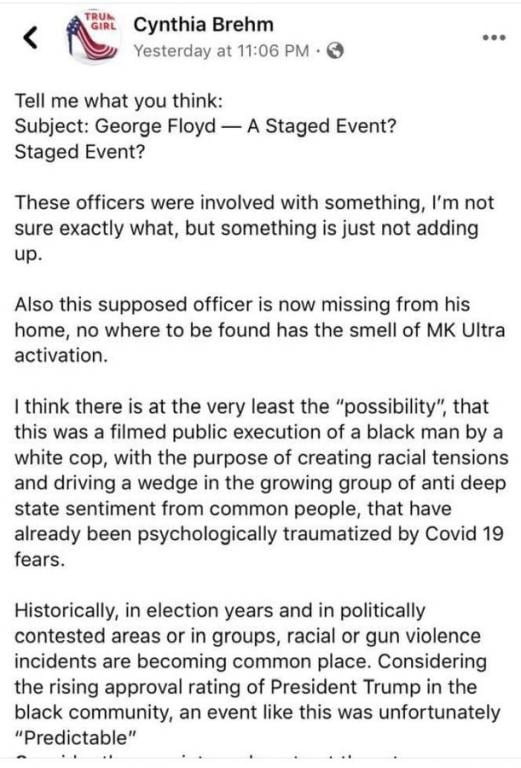 These officers were involved in something, I’m not sure exactly what, but something is just not adding up.

Also this supposed officer is now missing from his home, no where to be found has the smell of MK Ultra activation.

I think that there is at the very least the `possibility’, that this was a filmed public execution of a black man by a white cop, with the purpose of creating racial tensions and driving a wedge in the growing group of anti deep state sentiment from common people, that have been already been psychologically traumatized by COVID 19 fears.

Considering the rising approval level of President Trump in the black community an event like this was entirely ‘Predictable.’

This is not the first time the Texas County GOP Chair has made headlines by sharing ridiculous conspiracy theories. Last month Brehm made the outrageous claim that the coronavirus pandemic is a Democratic hoax.

As a result of making the dangerous and idiotic claim that the police killing of George Floyd was a staged event meant to damage Trump’s reelection campaign, Texas Governor Greg Abbott is calling on Brehm to resign.

In a statement, John Wittman, the governor’s communications director, said:

These comments are disgusting and have no place in the Republican Party or in public discourse. Cynthia Brehm should immediately resign her position as chair of the Bexar County Republican Party.

Bottom line: Bexar County GOP Chair Cynthia Brehm is facing calls for her resignation after making the outrageous claim that the police killing of George Floyd was a “staged event” to damage the reelection of Donald Trump.

June 4, 2020 3 Boogaloo Bois Arrested On Domestic Terrorism Charges In Las Vegas
Recent Comments
0 | Leave a Comment
Browse Our Archives
get the latest from
Progressive Secular Humanist
Sign up for our newsletter
POPULAR AT PATHEOS Nonreligious
1

“In the Heights” Manages to Hit Most of...
Lin-Manuel Miranda’s first musical (before that other one) is largely successful in...
view all Nonreligious blogs
What Are Your Thoughts?leave a comment
Copyright 2008-2021, Patheos. All rights reserved.