False Flag: The white nationalist group Identity Evropa is caught calling for violence while posing as representatives of the anti-fascist collective Antifa on Twitter.

A Twitter account claiming to belong to a national “antifa” organization and pushing violent rhetoric related to ongoing protests has been linked to the white nationalist group Identity Evropa, according to a Twitter spokesperson.

Twitter said Monday that it has suspended an account named “ANTIFA_US” which it says was tied to the white nationalist group Identity Evropa. Over the weekend, the account had called for violence and its posts had widely circulated online.

ALERT Tonight’s the night, Comrades Tonight we say “F**k The City” and we move into the residential areas… the white hoods…. and we take what’s ours #BlacklivesMaters #F**kAmerica. 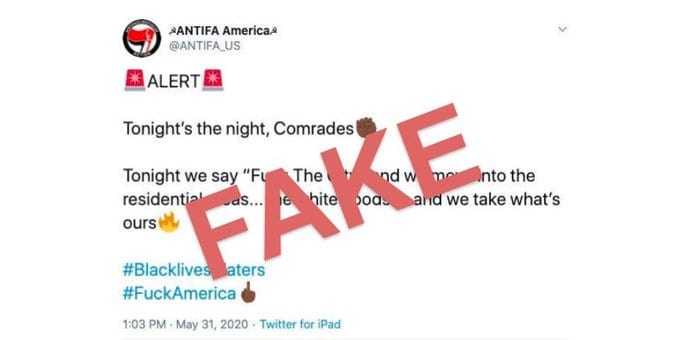 A Twitter spokesperson told Business Insider that this isn’t the first time that users linked to Identity Evropa have created fake accounts to spread “hateful content.” Some white nationalists have advocated for the acceleration of conflict between protesters and police in order to spur race riots.

The fact that white supremacists are using protests over the police killing of George Floyd to foment confusion, violence, and animosity should come as no surprise.

Earlier this week Progressive Secular Humanist reported that Minnesota officials had linked some of the rioting and vandalism that occurred during the protests over the police killing of George Floyd to white supremacist groups.

In fact, white nationalists, white supremacists, right wing militias, gun rights extremists, Proud Boys, and other far right extremists known as “Boogaloo Bois” have been infiltrating recent protests over the police killing of George Floyd, taking advantage of the crowds and the emotionally charged atmosphere to instigate chaos and disruption via vandalism, violence and fires in an attempt to discredit the Black Lives Matter movement and further their goal of a race-based civil war.

As for Antifa, the is no central leadership for the anti-fascist movement. It is not an organized group with Twitter accounts. Antifa is simply a collection of individuals who oppose fascism, and are willing to stand up to fascists.

Despite the facts, earlier this week Trump tweeted he would designate Antifa a terrorist organization.

Adding to the farce, Trump’s son, Don Jr., retweeted the white supremacists posing as Antifa before twitter suspended the account.

Bottom line: A white nationalist group was caught calling for violence while posing as representatives of the anti-fascist collective Antifa on Twitter.

June 1, 2020
Trump Poses With Bible After Mobilizing Military Against Protesters
Next Post