“Good Christian Man” – In a despicable display of misogyny and incivility, GOP Rep. Ted Yoho says he cannot apologize for loving God after calling Rep. Alexandria Ocasio-Cortez a “f*cking bitch” on the steps of the Capitol on Tuesday.

Rep. Ted Yoho—despite some headlines claiming otherwise—has refused to properly apologize for accosting his colleague, Rep. Alexandria Ocasio-Cortez, outside the Capitol building this week and reportedly calling her a “f*cking bitch” as he was walking away. Instead, in a speech on the House floor Wednesday, the Florida Republican offered a string of bizarre explanations—including his supposed “passion,” his love of God, and his role as a father and a husband—that, at best, resembled a half-assed sort-of-apology. Yoho also offered something of a denial, though it wasn’t clear exactly what he was denying.

After being caught making the heinous gender slur, Yoho made a half-hearted attempt at an apology which was ultimately more of a non-apology than an apology.

Having been married for 45 years with two daughters, I’m very cognizant of my language. The offensive name-calling, words attributed to me by the press were never spoken to my colleagues and if they were construed that way, apologize for my—I apologize for my misunderstanding. My wife Carolyn and I started together at the age of 19 with nothing. We did odd jobs. And we were on food stamps. I know the face of poverty. And for a time it was mine. That is why I know people in this country can still with all its faults rise up and succeed and not be encouraged to break the law. I will commit to each of you that I will conduct myself from a place of passion and understanding that policy and political disagreement be vigorously debated with the knowledge that we approach, the problems facing our nation with the betterment with the country in our mind and the people we serve.

I cannot apologize for my passion for loving my god, my family, and my country.

In front of reporters, Rep. Yoho called me, and I quote, ‘a f*cking b*tch’ These are the words that Rep. Yoho levied against a congresswoman.

I do not need Rep. Yoho to apologize to me—clearly he does not want to, clearly when given the opportunity he will not. I will not stay up late at night waiting for an apology from a man who has no remorse over calling women and using abusive language towards women. But what I do have an issue with is using women, our wives, and daughters as shields and excuses for poor behavior..

I am someone’s daughter too. My father thankfully is not alive to see how Mr. Yoho treated his daughter. My mother got to see Mr. Yoho’s disrespect on the floor of this House towards me on television. I am here because I have to show my parents that I am their daughter and they did not raise me to accept abuse from men.

Bottom line: After calling Rep. Alexandria Ocasio-Cortez a “f*cking b*itch,” Congressman Ted Yaho declares: “I cannot apologize for my passion for loving my god, my family, and my country.” 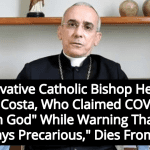 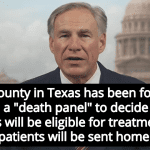 July 24, 2020 Texas County Forced To Set Up ‘Death Panel’ As COVID-19 Cases Surge In State
Recent Comments
0 | Leave a Comment
Browse Our Archives
get the latest from
Nonreligious
Sign up for our newsletter
POPULAR AT PATHEOS Nonreligious
1