More Of That Christian Love: Christian TV host Rick Wiles asks President Donald Trump to use “hollow-point bullets” on protesters to “put down this communist revolution” in Portland, Oregon.

Rick Wiles, pastor, radio host, and conspiracy theorist, believes that there is a secret stockpile of bullets hoarded under the Obama administration for the purpose of quelling an uprising. Now, he says, Donald Trump should put those two billion bullets to use in stopping the protests that are ongoing in Portland.

Wiles, appearing on a recent broadcast of his TruNews show, said:

You don’t have to tolerate this anymore. They were purchased for the purpose of putting down an insurrection. Well, you got one, so put the hollow-point bullets to good use and get out there and put down this communist revolution so the rest of us can live our lives peacefully.

Radical conspiracy theorist Rick Wiles tells Trump to take the billions of bullets that Obama supposedly stockpiled and put them “to good use” against protesters. pic.twitter.com/yESP8TriTy

Wow. Can you feel the Christian love?

Commenting on all that alleged ammunition, the TruNews show notes that “the federal army and arsenal at President Trump’s disposal to quell the insurrection,” exists because of  “the billions of bullets Barack Hussein Obama hoarded to round up Christians and constitutionalists under a President Hillary Clinton.”

Wow. Can you feel the insanity?

Wiles is a popular but controversial conservative Christian leader prone to making outrageous and alarming claims. For example, before the 2018 midterm elections, Wiles warned his viewers that if Democrats won the election they would slaughter “tens of thousands of Christians.” Yet even though the Democrats did win the House in the midterm election, as of today, there have been no reports of Christians being slaughtered.

Previously the Christian TV host warned his followers that MSNBC’s Rachel Maddow was preparing to lead a bloody coup to overthrow the Trump administration.

Yet for those who want to dismiss Wiles as a lone lunatic, it is important to note that he is a popular conservative Christian broadcaster with a large audience, and White House press credentials. 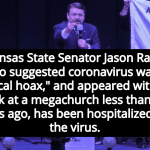 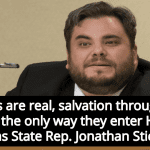