Pat Robertson Is Humiliated Because Cocaine And Marijuana ‘Are Vegetables’

Pat Robertson Is Humiliated Because Cocaine And Marijuana ‘Are Vegetables’ July 18, 2020 Michael Stone

Slaves To Vegetables: Speaking with Fox News host Sean Hannity, Televangelist Pat Robertson says that he is humiliated because cocaine and marijuana “are vegetables.”

Robertson, speaking on Hannity’s radio program earlier this week, lamented the fact that “somebody made in the image of God is a slave to a bunch of weeds.” On the program, Hannity said:

I’ve found as I get older in life, and I don’t have the longevity genes you do, and my stress level’s a little bit out of control right now, I’m not gonna lie — and I’m just thinking that at the end of the day, if you believe that there is a God, and he’s the creator of every man, woman, and child on this earth, and that man’s struggle is that they’re a fallen being, and that people have a propensity for good and evil — you know, I believe that the good outnumber the evil by a longshot, and I — you know, if anything, I would argue that the human, you know, — might is — I guess “strong is the desire, but weak is the flesh,” I guess is a common quote in the Bible, I know I didn’t say it well.

But the desire is strong, the heart is there, but, you know, the pull of the flesh, I guess, is weak, and I’m not talking about any one sin. Do you believe, as I do, that most people are good people?

I think we have within us — you know, one of the things that I’ve pointed out in my book and others, we are made as tripartate beings. We have a body, we have a spirit, and the two together make up a soul, and we are created in the image of God, and we are — can be like God. We have enormous power, if we give it to the Lord. Whereas the same time, there is an enemy who wants to destroy us, who hates humanity, who hates the people created in God’s image, and they’ll do everything to destroy us.

All this drug addiction, can you imagine somebody made in the image of God is a slave to a bunch of weeds? I mean, you know, they’re plants and vegetables. Cocaine, marijuana, all these things are vegetables, and we’re supposed to be in charge. He said I’m going to give you dominion over the whole earth, and yet we’re slaves to vegetables. I mean, this is so humiliating.

Bottom line: Pat Robertson is humiliated because cocaine and marijuana are vegetables, and “we’re slaves to vegetables.” 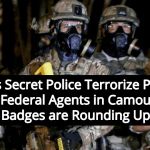 July 17, 2020
Trump Sends Secret Police To Round Up Protesters In Portland, Oregon
Next Post 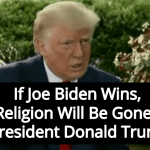 July 19, 2020 Trump Claims If Biden Wins Religion Will Be Abolished In America
Recent Comments
0 | Leave a Comment
Browse Our Archives
get the latest from
Progressive Secular Humanist
Sign up for our newsletter
POPULAR AT PATHEOS Nonreligious
1