Domestic Terrorism For Jesus: The Christian crowdfunding site GiveSendGo is hosting a fundraising drive for alleged domestic terrorist Kyle Rittenhouse after legitimate crowdfunding sites like GoFundMe refused to do so.

GiveSendGo, which self-identifies as the “fastest growing Christian Crowdfunding site made by Christians for Christians,” has already raised over a $100,000 for the Kenosha killer Kyle Rittenhouse, the domestic terrorist charged with murder after killing two BLM protesters and wounding another.

The comments on the site are even more obnoxious. For example:

Previously supporters of Rittenhouse tried to use the respected and trusted site GoFundMe to raise funds for the terrorist, but GoFundMe immediately removed any such effort. The Milwaukee Journal Sentinel reports:

GoFundMe forbids people from using the platform to raise money for “the implicit or explicit purpose of or involving for the legal defense of alleged crimes associated with hate, violence, harassment, bullying, discrimination, terrorism, or intolerance of any kind relating to race, ethnicity, national origin, religious affiliation, sexual orientation, sex, gender, gender identity, gender expression, serious disabilities or diseases, financial crimes or crimes of deception,” according to the terms of service.

In short, GoFundMe is much more ethical than the Christian crowdfunding site GiveSendGo.

Bottom line: The Christian crowdfunding site GiveSendGo is hosting a fundraising drive for alleged domestic terrorist Kyle Rittenhouse after legitimate crowdfunding sites like GoFundMe refused to do so. 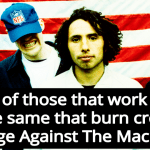 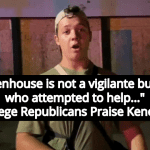 August 29, 2020 College Republicans Raising Money For Kenosha Killer Kyle Rittenhouse
Recent Comments
0 | Leave a Comment
"Tippling Philosopher is widely regarded as perhaps the best Patheos non religious blogs."
Geoff Benson Fox News Host Bill Hemmer Warns ..."
"Reminds me of condemnations of rock-&-roll by Southern Baptists (& other like-minded fundies) back in ..."
Georgia Sam Pentecostal Christians Are Burning Australia’s Sacred ..."
"I am called a bigot, a fool, referred to as "my kind", "nigerian white supremacist ..."
MrPeach Texas Governor: ‘The Problem is Not ..."
"you sure can run your mouth here, now explain your downvote to my harmless comment. ..."
Joshua Booker Million MAGA March: Militias, Proud Boys, ..."
Browse Our Archives
get the latest from
Progressive Secular Humanist
Sign up for our newsletter
POPULAR AT PATHEOS Nonreligious
1