Deplorable: President Donald Trump ordered FEMA to deny assistance to California wildfire victims because people in the state were not part of his political base, according to a report from Miles Taylor, the former Chief of Staff at the Department of Homeland Security.

You can add another name to the long list of former Trump administration officials who’ve broken ranks with the capricious Commander in Chief. In a video making the rounds on Twitter, former Department of Homeland Security staffer Miles Taylor endorses Democratic nominee Joe Biden for president and catalogues the “terrifying” things he says he saw during his time at the White House, among them Trump ordering the Federal Emergency Management Administration to stop issuing disaster relief funds to wildfire-stricken California.

According to a news release from California Congressman Ted Lieu, at least 27 members of congress are asking for “an investigation into allegations that the federal government improperly denied or delayed aid to California wildfire victims.”

LOS ANGELES – Today, Congressman Ted W. Lieu (D-Los Angeles County), along with 26 Members of Congress from California, called for an investigation into allegations that the federal government improperly denied or delayed aid to California wildfire victims. The letter follows allegations from a former Department of Homeland Security official that President Trump ordered FEMA to deny assistance to Californians because of the political demographics of the state.

We are deeply disturbed by recent statements made by Miles Taylor, the former Chief of Staff at the Department of Homeland Security (DHS), regarding assistance to fire victims. Mr. Taylor reported that during a call with DHS and the Federal Emergency Management Agency (FEMA), President Trump directed FEMA to deny assistance to wildfire disaster victims in California. Mr. Taylor said:

“He told us to stop giving money to people whose houses had burned down from a wildfire because he was so rageful that people in the state of California didn’t support him and that politically it wasn’t a base for him.”

Adding fuel to the fire, earlier this week at a rally in Pennsylvania Trump threatened to withhold federal funds from California for the wildfires currently raging across the state, Trump blamed the state for the wildfires, declaring:

“You gotta clean your floors”? What an idiot.

Bottom line: Trump ordered FEMA to deny assistance to California wildfire victims because “the state of California didn’t support him and that politically it wasn’t a base for him.” 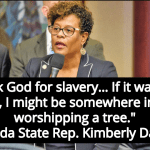 August 21, 2020
Florida Lawmaker Who Thanks God For Slavery Loses Re-Election Bid
Next Post 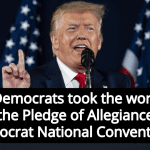 August 22, 2020 Trump Lies, Claims Democrats Omitted God From Pledge Of Allegiance At Convention
Recent Comments
0 | Leave a Comment
"so if the repubs get curb stomped in the election (like we all hope) is ..."
Kit Hadley-Day Trump Pastor: If Biden Wins People ..."
"I call BS, anyway the Hindus would call shame."
Philip Buczko Trump Pastor: If Biden Wins People ..."
"Trump QUOTE . . we’re like a rocket ship. Take a look at the numbers.UN-QUOTEHmmm? ..."
vortexau Trump Tries To Mock Joe Biden ..."
"Well, he got that really wrong. Cattle are too large and heavy to keep in ..."
vortexau Trump Pastor: If Biden Wins People ..."
Browse Our Archives
get the latest from
Progressive Secular Humanist
Sign up for our newsletter
POPULAR AT PATHEOS Nonreligious
1