Miscarriage Of Justice: Two adult Amish brothers who repeatedly raped and impregnated their 13-year-old sister will serve no jail time for their crime, instead they will write letters of apology to the Amish community.

Two Amish brothers, 22-year-old Aaron C.M. Schwartzand 18-year-old Petie C.M. Schwartz, plead guilty last week to two counts of third-degree child molestation with a child under the age of 14, a Class C felony, in connection with events last year and earlier this year when they and two of their younger brothers, both minors, engaged in sexual relations with their younger sister, who was only 12 and13 years old at the time of the alleged sexual acts.

The two must also pay $250 to law enforcement and are required to write an apology letter to the Amish community.

According to online court records, Aaron Schwartz, 22, and Petie Schwartz, 18, were both originally charged with six felony counts of statutory rape or attempted rape.

The victim, who is only 13 years old, recently had a baby. The father is one of her brothers.

The crime is heinous. But perhaps even more disturbing is the preferential treatment the rapists received from Webster County Prosecuting Attorney Ben Berkstresser. Attempting to explain the fact that he allowed the child rapists to get away with their crime with no jail time and a mere slap on the wrist,  Berkstresser said:

In the end, this wasn’t a case of a parent and child, where a parent in a position of authority sexually abused or exploited their child… And I made the decision not to send them to the DOC, to suspend the sentences. These two young men would’ve been eaten alive in the state prison system.

The fact that Berkstresser is making excuses for these child rapists is despicable. His failure to prosecute the adult brothers for repeatedly raping a child is a gross dereliction of duty and a slap in the face to every victim.

Berkstresser’s concern that the rapists “would’ve been eaten alive in the state prison system” is a clear signal that he is giving these criminals preferential treatment due to the fact that they are Amish.

By giving the Amish brothers preferential treatment, Berkstresser is enforcing two standards of justice: one for the Amish, and one for everyone else.

Bottom line: Two adult Amish brothers who repeatedly raped and impregnated their 13-year-old sister are given preferential treatment by Webster County Prosecuting Attorney Ben Berkstresser. As a result they will serve no jail time for their heinous crimes; instead of prison they will write letters of apology to the Amish community. 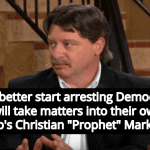 September 17, 2020 Idaho Pastor Who Defied Mask Mandate Now In ICU Fighting COVID-19
Recent Comments
0 | Leave a Comment
Browse Our Archives
get the latest from
Nonreligious
Sign up for our newsletter
POPULAR AT PATHEOS Nonreligious
1