Bondi appeared on Sean Hannity’s Fox News show to discuss new video footage released by Rittenhouse’s attorney which paints the suspect in a favorable light and suggests his actions were justified in the “war zone” which had broken out in Kenosha in the wake of the police shooting of Jacob Blake.

Pam Bondi, the former Florida attorney general and a prominent surrogate for President Donald Trump’s campaign, on Tuesday defended Kyle Rittenhouse – the 17-year-old charged in the shooting deaths of two people in Kenosha, Wisconsin – as “a little boy out there trying to protect his community.”

Rittenhouse, the domestic terrorist charged with murder after killing two BLM protesters and wounding another, was the topic of conversation on Sean Hannity’s Fox News show last night. Commenting on the story, Bondi defended the killer, claiming “this kid was trying to help people” and calling Rittenhouse “ a little boy out there trying to protect his community.”

There were bullets flying everywhere. Other people were firing, This kid was trying to help people. Were there people killed? Absolutely.

For the second time tonight Fox News is unabashedly defending Kyle Rittenhouse with Pam Bondi calling him “a little boy out there trying to protect his community” pic.twitter.com/PzDKJVSDec

As one might imagine, Bondi’s perverse praise for a domestic terrorist was met with scorn and derision on social media:

Just so we’re all clear, Kyle Rittenhouse, white male age 17, who murdered 2 people, is a child, and Tamir Rice, a Black male age 12, who murdered zero people, was a man.

Kyle Rittenhouse was 17 yo when he crossed state lines with an AR-15.

He didn’t go there to protect anyone or anything.

He went there to feel included in something.

He went to hurt people.

He’s not a little boy. He’s not going to be tried as one. https://t.co/ZwJLZj3NEN

The Republican Party has become the party of encouraging teenagers like Kyle Rittenhouse to kill innocent Americans.

If you really want Law & Order we must get rid of the criminals in the White House and Senate.

Kyle Rittenhouse is a 17 yr old young man who drove across state lines with an AR-15 to murder two people.

Kyle Rittenhouse is a terrorist. Fox is promoting terrorism. It’s not the first time. It won’t be the last. It may get worse. The Reagan-era shenanigans that enabled Murdoch to buy Fox, got rid of fairness doctrine, were among the most damaging developments in modern US history. https://t.co/yAaPgoqrb5 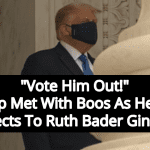 September 24, 2020 Trump Booed And Humiliated While Paying Respects To Ruth Bader Ginsburg
Recent Comments
0 | Leave a Comment
"Jeffress: "the Bible says, we need to obey God rather than man."The bible also says ..."
S. Arch Conservative Christians Reject Science, Ignore Holiday ..."
"If he refuses the vaccine that is his decision, but he should NEVER make that ..."
Judgeforyourself37 California Bishop Urges Catholics To Reject ..."
"Sadly they are putting themselves and others in danger of severe illness and possible death. ..."
Judgeforyourself37 Conservative Christians Reject Science, Ignore Holiday ..."
"Another moroon for Jeezis ."
Richard B California Bishop Urges Catholics To Reject ..."
Browse Our Archives
get the latest from
Progressive Secular Humanist
Sign up for our newsletter
POPULAR AT PATHEOS Nonreligious
1