Televangelist Pat Robertson said on Thursday’s episode of his television program The 700 Club that the Black Lives Matter (BLM) movement is attempting to destroy Christianity.

The 90-year-old televangelist made his remarks condemning the Black Lives matter movement while appearing on his Christian television show “The 700 Club.”

Robertson’s rant begins with a discussion of professional athletes like NFL player Colin Kaepernick and others supporting the protest movement against police brutality and systemic, institutionalized racism.

While Robertson said he agreed that police brutality was wrong, he argued that the Black Lives Matter movement was made up of “radicals” who had “hijacked” the cause against racism and police brutality, claiming “that legitimate thing has been hijacked by these radicals and they’re using that label to put forth an agenda and people need to be aware of it.”

People should be aware that they’re not just standing with the poor oppressed Black people. Of course we want to stand with people against police brutality. Of course we do. But we don’t want to go along with a lesbian, anti-family, anti-capitalist Marxist revolution. We don’t want that for America.

Bottom line: Pat Robertson is still alive, and he claims the Black Lives Matter movement is a lesbian-led “anti-family, anti-capitalist, Marxist revolution” that wants to destroy Christianity for “being racist.” 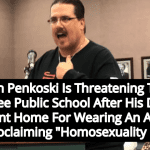 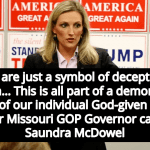