Teaching Children To Hate: A conservative Christian preacher in Tennessee is threatening to sue his daughter’s public high school after the girl was sent home for wearing an anti-gay shirt proclaiming “Homosexuality is a sin.”

An outspoken Christian preacher and activist is accusing his daughter’s school of violating her First Amendment rights by forcing her to change out of a shirt proclaiming that “homosexuality is a sin.” He is contemplating legal action.

Brielle Penkoski, the daughter of Rev. Rich Penkoski, attends Livingston Academy, a public high school in Livingston, Tennessee. During the school day on Tuesday, Aug. 25, she was allegedly asked to change out of a black T-shirt shirt bearing white letters asserting that “homosexuality is a sin.”

On his Twitter account Rev. Penkowski identifies himself as a “street preacher” who has shut down “15 Drag Queen Story Hours.”

In this recent video he posted to his Twitter feed Penkowski tries to argue that LGBT people are really pedophiles, a claim that has no basis in fact, but one that is often made by ignorant conservative Christians in an attempt to justify their hatred and bigotry for LGBT people:

As for the anti-gay shirt his daughter wore to school, Penkowski claims his daughter wanted to wear the hateful shirt, telling The Christian Post:

They’ve got kids walking around with the pride symbol on their sneakers and pride clothing and nobody bats an eye.

She was basically censored. It’s not fair … that she’s told that she can’t wear that shirt and other people can wear the stuff that they wear. But if a Christian comes up there and repeats what the Bible says, they are seen as intolerant, they are seen as hateful. Simply saying ‘homosexuality is a sin’ is not hate speech. That’s what the Bible says. And we need to start preaching truthfully.

Obviously Penkoski is wrong. Wearing a shirt proclaiming “Homosexuality Is A Sin” is a despicable act of hatred, a deplorable and a mean-spirited attempt to shame and belittle LGBT people. It has no place in a public school.

Bottom line:  A conservative Christian preacher in Tennessee is threatening to sue his daughter’s public high school after the girl was sent home for wearing an anti-gay shirt proclaiming “Homosexuality is a sin.” 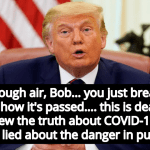 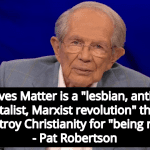