Federalist: ‘Strong Women Like Amy Coney Barrett Submit To Their Husbands With Joy’

Misogyny For Jesus: Influential conservative publication The Federalist celebrates Supreme Court nominee Amy Coney Barrett because she submits to her husband “with joy.”

In a deplorable bit of Christian propaganda, Matthew Cochran, writing for The Federalist, invokes the Bible to justify his position that women are inferior and should submit to their husbands:

Wives, submit to your own husbands, as to the Lord. For the husband is head of the wife even as Christ is the head of the church, his body, and is himself its Savior. Now as the church submits to Christ, so also wives should submit in everything to their husbands. (Eph. 5:22-24)

Now that Amy Coney Barrett’s nomination to the Supreme Court is official, leftists everywhere are casting aspersions at the wall to see what sticks…

The most interesting smear, however, regards feminine submission — an apparent teaching of Barrett’s faith group, People of Praise…

I’d like to say it’s just those darned pagan liberals who hate the biblical teaching that wives are to submit to their husbands. But the fact is, feminism has finished its long march through the institutions, and most conservatives have been indoctrinated to hate this teaching as well.

The obnoxious and patronizing Cochran goes on to try and justify his position that women are inferior and should submit to their husbands. The whole line of argument is despicable, and reflects the sexism and misogyny that permeates all facets of Christianity.

The following is a sample of reactions to the article via Twitter:

Hey, ladies. Are you listening? Soon, you’ll be able to submit to your husbands….. with joy.https://t.co/Hv3l3FkAc7

Isn’t that what the taliban said? Women submit to their husbands with joy.

This is the female role model Judge Barrett is: “Submission brings the blessing of peace into marriage by uniting a couple in common purpose.” #RBGsDyingWish #SCOTUSnominee #AmyConeyBarrettSCOTUS https://t.co/h8tgUKq6Kg

This is a long defense of wife-beating. #PatriarchyIsAbusehttps://t.co/KFBjSscYIE

Now publications like the @FDRLST are openly promoting the idea that women should be “handmaids” to men: https://t.co/EqMCnPAavG

There’s a lot in this article that’s objectively … funny. Unintentionally (I think) but, objectively funny. Starting with “I’d like to say it’s just those darned pagan liberals who hate the biblical teaching” “Those Darned Pagan Liberals!”= gold. https://t.co/XLHeLbqXnp

For the record, while Amy Coney Barrett may take joy in submitting to her husband, she is also a dangerous religious extremist who believes a federal judge can subvert the U.S. Constitution and the laws of the United States in order to promote her own religious agenda. If given the chance, Barrett will replace secular law with conservative Christian dogma and bigotry. As such, she has no business serving on the Supreme Court.

Bottom line: The influential conservative publication The Federalist celebrates Supreme Court nominee Amy Coney Barrett because she submits to her husband “with joy.” 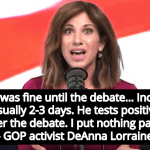 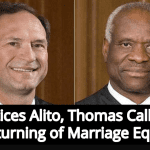 October 5, 2020 Report: Justices Thomas And Alito Plan To Overturn Same-Sex Marriage
Recent Comments
0 | Leave a Comment
Browse Our Archives
get the latest from
Progressive Secular Humanist
Sign up for our newsletter
POPULAR AT PATHEOS Nonreligious
1