Supreme Court Justices Samuel Alito and Clarence Thomas have opened the court’s term by calling for the overturning of its 2015 marriage equality decision.

Justice Clarence Thomas, joined by Justice Samuel Alito, lashed out on Monday at the religious liberty implications of the Supreme Court’s 2015 decision that cleared the way for same-sex marriage nationwide.

Obergefell v. Hodges is the “landmark civil rights case in which the Supreme Court of the United States ruled that the fundamental right to marry is guaranteed to same-sex couples by both the Due Process Clause and the Equal Protection Clause of the Fourteenth Amendment to the United States Constitution.”

[Obergefell v. Hodges] enables courts and governments to brand religious adherents who believe that marriage is between one man and one woman as bigots, making their religious liberty concerns that much easier to dismiss.

By choosing to privilege a novel constitutional right over the religious liberty interests explicitly protected in the First Amendment, and by doing so undemocratically, the Court has created a problem that only it can fix. Until then, Obergefell will continue to have ‘ruinous consequences for religious liberty.’

In the same decision Alito wrote:

Due to Obergefell, those with sincerely held religious beliefs concerning marriage will find it increasingly difficult to participate in society without running afoul of Obergefell and its effect on other antidiscrimination laws.

In Obergefell v. Hodges … the Court read a right to same-sex marriage into the Fourteenth Amendment, even though that right is found nowhere in the text. Several Members of the Court noted that the Court’s decision would threaten the religious liberty of the many Americans who believe that marriage is a sacred institution between one man and one woman. If the States had been allowed to resolve this question through legislation, they could have included accommodations for those who hold these religious beliefs. … The Court, however, bypassed that democratic process. Worse still, though it briefly acknowledged that those with sincerely held religious objections to same-sex marriage are often ‘decent and honorable,’ … the Court went on to suggest that those beliefs espoused a bigoted worldview.

Pro Tip: If your religious superstition demands that you try to deny same-sex couples the right to marriage, you are, in fact, a bigot. Full stop.

First day of the SCOTUS term and Alito & Thomas call for the overturning of Obergefell. pic.twitter.com/IwejJL6dGX

That didn’t take long: the Supreme Court’s first day back without RBG and Alito and Thomas are trying to end gay marriage. 29 days. Please vote everyone!!!! https://t.co/IkuSLu8KCN

The Supreme Court turned away Kim Davis’ case, but Thomas (joined by Alito) wrote a jaw-dropping rant taking direct aim at Obergefell and suggesting that SCOTUS must overturn the right to marriage equality in order to protect free exercise. https://t.co/qES8IZkw0U pic.twitter.com/F0zrYdBaeH

Just a reminder that overturning #Obergefell (gay marriage) is in the Republican Party’s official platform. Alito and Thomas just signaled their wishes to overturn it and we already know where Barrett stands on the issue. Please vote.

Amy Coney Barrett has given several paid speeches to an organization that advocated re-criminalizing homosexuality. Add to Alito & Thomas and there’s no mystery where the Court would head if she is confirmed. https://t.co/Hl62Yktdat 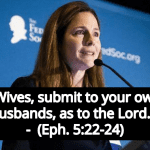 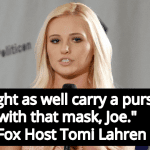 October 6, 2020 Fox Host Tomi Lahren Mocks Joe Biden For Wearing A Mask
Recent Comments
0 | Leave a Comment
"And JC said, starve the little chidren, for as much as you do it unto ..."
David Cromie Fox News Guest: Children Don’t Deserve ..."
""....are there no work houses....""
Erik1986 Fox News Guest: Children Don’t Deserve ..."
"Tsarist Russia was anything but a free market, and neither was the aristocratic system in ..."
Person223 Fox News Guest: Children Don’t Deserve ..."
"The right of males to reproduce, rendering a woman's reproductive organs chattel, disregarding the whole ..."
Anon E Moss New Legislation In Tennessee Would Allow ..."
Browse Our Archives
get the latest from
Nonreligious
Sign up for our newsletter
POPULAR AT PATHEOS Nonreligious
1