On Monday’s episode of his “TruNews” program, Florida-based End Times broadcaster Rick Wiles praised the state’s Republican governor for proposing a law that would allow citizens to shoot anyone suspected of rioting or looting and warned left-wing activists to flee the state because “we’re coming after you.”

On his program Wiles declared:

The governor wants a bill passed in Florida to empower citizens to shoot and kill looters and rioters. Yes, sir. Get it done, governor. The people are with you.

We’re going to defend this state of Florida. We’re not going to put up with this stuff anymore. The left, you better pack up and flee.

In short, Wiles is inciting his followers to violence, while fantasizing about conservative Christians killing “lefties.”

However, considering the source, the remarks are not surprising. Wiles is a popular but controversial conservative Christian leader prone to making outrageous and alarming claims. For example, last July, Wiles asked President Donald Trump to use “hollow-point bullets” on protesters to “put down” a “communist revolution” in Portland, Oregon.

Previously the Christian TV host warned his followers that MSNBC’s Rachel Maddow was preparing to lead a bloody coup to overthrow the Trump administration.

Yet for those who want to dismiss Wiles as a lone lunatic, it is important to note that he is a popular conservative Christian broadcaster with a large audience, and White House press credentials. 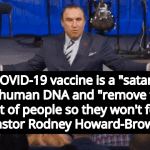