Anti-Science: Conservative Christians are rejecting science and choosing to ignore holiday COVID restrictions, placing themselves, those they love, and everyone else at risk.

I’m Listening to God, Not the WHO

Pastor Robert Jeffress, a White House Faith Initiative member and staunch President Donald Trump supporter, said he’s only listening to God and not human health officials, as he and his megachurch congregation prepare for Thanksgiving.

The Democrats are trying to stop churches from meeting.

I think I’m going to listen to God’s word rather than the WHO when it comes to worship.

We can be socially distanced, we can practice good safety matters, but we can’t shut down. And as the Bible says, we need to obey God rather than man. A pastor has a responsibility to keep his church safe, but also to keep it open.

And Jeffress is not alone in his rejection of science. A megachurch pastor in California recently tolds his congregation to ignore the “tyranny” of holiday COVID restrictions. Pastor Rob McCoy of Godspeak Calvary said:

We are finished with (this) tyranny. We are going to enjoy Thanksgiving and worship our God. I can’t wait to have a wonderful big (Thanksgiving) party.

We are still standing because men and women have a spine and continue to push back. If we fold, we’re going to have to explain to the generation to come, that on our watch, we surrendered the greatest nation to tyranny.

Our birth rate is plummeting, our churches are silent, and now we are coming into Thanksgiving and I really do believe that God is causing an awakening in the hearts of America.

However, despite the willful ignorance of many conservative Christians, public pressure can have a positive effect. Yesterday an Oklahoma megachurch cancelled  a “Friendsgiving” event that would have violated COVID restrictions and placed thousands in danger.

A Tulsa, Oklahoma, mega-church canceled a “Friendsgiving” event, for which it had initially encouraged members to bring a neighbor and had sparked outrage on social media, instead deciding to give out boxed meals to those in need amid rising Covid-19 cases in the state.

Bottom line: Many conservative Christians are rejecting science and choosing to ignore holiday COVID restrictions, placing themselves, those they love, and everyone else at risk. 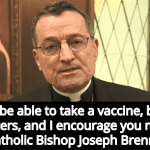 November 24, 2020 NY State Sues Buffalo Diocese For Failing To Protect Children From Predatory Priests
Recent Comments
0 | Leave a Comment
Browse Our Archives
get the latest from
Progressive Secular Humanist
Sign up for our newsletter
POPULAR AT PATHEOS Nonreligious
1