The video, released by Alyssa Estrada of CBS News shows a group of women wearing MAGA hats on their knees praying and chanting for their Dear Leader, Donald Trump:

Women just arrived at the Clark County election department. They tell me they’re praying justice will be done and that righteousness prevails. pic.twitter.com/xi0Q9hOS51

Women just arrived at the Clark County election department. They tell me they’re praying justice will be done and that righteousness prevails.

A group of Donald Trump’s supporters gathered outside a Nevada counting centre as votes were being tallied to pray for the president’s re-election.

A video broadcast by ABC News showed several Trump supporters kneeling in prayer on the ground outside the Clark County Election Department as counting continued in the potentially pivotal state on Thursday.

How is this not a cult?

Remember those clips of people crying at the Clinton election night location in 2016? The ones that we have been shown ad nauseum since?

Let me raise you these ladies praying for Trump in Clark County, NV.pic.twitter.com/cd8cieamLG

Female Trump supports gather outside the Clark County election department. They say they are praying justice will be done and that righteousness prevails.

WACK!! Trump supporters are turning out to be nutcases.#ElectionResults2020 pic.twitter.com/v5TPODkMne

We are the stupidest country in the world. https://t.co/1ag6jRXtd0

In short, the Cult Of MAGA is left with only magical thinking and religious superstition. Perhaps that’s all they ever had. 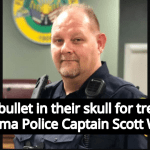 November 5, 2020
Alabama Police Captain On Biden Voters: ‘Put A Bullet In Their Skull For Treason’
Next Post 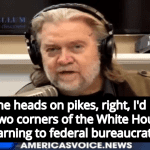 November 6, 2020 Trump Ally Steve Bannon Calls For Beheading Of Dr. Fauci And FBI Director Wray
Recent Comments
0 | Leave a Comment
Browse Our Archives
get the latest from
Progressive Secular Humanist
Sign up for our newsletter
POPULAR AT PATHEOS Nonreligious
1