White held a marathon prayer service in Orlando, Florida, on Wednesday at the New Christian Destiny Center, calling on God for divine intervention in the presidential race. During the live-streamed prayer, White spoke in tongues and claimed “demonic confederacies” were “attempting to steal the election from Trump,” while also claiming that  angels hads been dispatched from Africa to deliver victory to the Trump campaign.

In the video, which has gone viral, White declares:

Angels are being dispatched right now. Angels have been dispatched from Africa right now. They’re coming here, in the name of Jesus.

I hear the sound of victory.

Paula White battles the “demonic confederacies” that are attempting to steal the election from Trump. pic.twitter.com/Bt3BJOkJIV 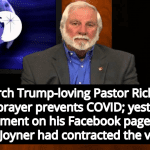 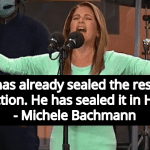 November 5, 2020 Bachmann: Trump Wins Because God ‘Sealed The Results Of This Election’ In Heaven
Recent Comments
0 | Leave a Comment
Browse Our Archives
get the latest from
Nonreligious
Sign up for our newsletter
POPULAR AT PATHEOS Nonreligious
1