Domestic Terrorists: Leaders of the Proud Boys, a far-right, neo-fascist group, are encouraging members to disguise themselves as Biden supporters in order to “wreak havoc” and engage in political violence at Biden’s presidential inauguration next month.

Members of the Proud Boys are reportedly plotting to disguise themselves as Joe Biden fans to wreak havoc during the presidential inauguration.

The Trojan Horse-style plot was revealed on InfoWars alum Joe Biggs’ YouTube channel — on which the right-wing militants were ordered to ‘kick off this presidency with f*cking fireworks.’

Discussing the Biden inauguration on YouTube, Proud Boys leader Enrique Tarrio instructed his followers to gain admission to the inauguration anyway possible, including by disguise as Biden supporters, and then “revolt.”

Do whatever you got to do to f*cking get your tickets. You show up there in Biden gear and you turn his inauguration into a f*cking circus, a sign of resistance, a sign of revolution.

Last September, during a presidential debate, when asked to condemn the political violence of the Proud Boys and other alt-right, white nationalist groups, Trump refused, and instead gave a shout out to the Proud Boys, telling them to “stand back and stand-by.”

The Proud Boys are not the only domestic terrorist organization planning violence when Biden assumes power. According to Stewart Rhodes, leader of the Oath Keepers, the  domestic terrorist militia will lead a “bloody civil war and revolution” if Trump leaves office and Joe Biden is sworn in as president.

Bottom line: The Proud Boys, a far-right, neo-fascist group, are encouraging members to disguise themselves as Biden supporters in order to “wreak havoc” and engage in political violence at Biden’s presidential inauguration next month. 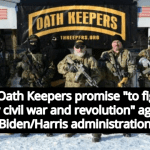 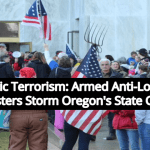 December 21, 2020 Armed Domestic Terrorists Storm Oregon Capitol, Disrupt Legislature Special Session
Recent Comments
0 | Leave a Comment
"Many atheists were once Christian. That's because Christianity will drive most intelligent, freethinking people to ..."
Larry Emmons Green Bay Packers Quarterback Aaron Rodgers ..."
""....won't flood the world again.". So, another non-bible reading preacher. Doesn't the Bible say something ..."
Erik1986 Robert Jeffress: Terrorists Storming U.S. Capitol ..."
"I volunteered also--it didn't get me what I wanted but it also didn't get me ..."
democommiescrazierbrother Study: Nearly 1 In 5 Terrorists ..."
"Le mot juste about!"
skinnercitycyclist Study: Nearly 1 In 5 Terrorists ..."
Browse Our Archives
get the latest from
Progressive Secular Humanist
Sign up for our newsletter
POPULAR AT PATHEOS Nonreligious
1