Good News: In a bipartisan effort the U.S. House has passed a resolution calling for the global repeal of blasphemy, heresy, and apostasy laws.

On Monday, Dec. 7, the House of Representatives passed on a 386-3 bipartisan vote House Resolution 512, calling for the global repeal of blasphemy, heresy and apostasy laws. Rep. Jamie Raskin (D-Md.) was a lead sponsor of the legislation in the House and was joined by 42 others, including 14 Republicans. A corresponding bill in the Senate is sponsored by James Lankford (R-Okla.) and eight other Republicans.

A press release from the lead sponsor of the resolution, Rep. Jamie Raskin, declares:

Today, Congressman Jamie Raskin’s (MD-08) bipartisan House Resolution 512, calling for the global repeal of blasphemy, heresy, and apostasy laws, passed the House of Representatives by an overwhelmingly bipartisan vote of 386-3. The Resolution also calls for the immediate release of religious prisoners of conscience worldwide. As more than 80 countries use blasphemy laws to persecute and imprison religious minorities and dissenters, the House asserted the essential importance of freedom of religion and liberty of conscience globally.

Immense gratitude goes out to all the faith and interfaith communities, humanists, and secularists across America who propelled us to this great coalition victory. https://t.co/iwrKz28mLk pic.twitter.com/chz5whz7mw

Rep. Raskin, speaking on the House floor before the vote, said in part:

H.R. 512 calls for global repeal of laws punishing blasphemy, heresy and apostasy, three religiously defined thought crimes that have no actual victims and thus no place in the criminal law of free nations. And yet governments in 84 countries, from Saudi Arabia and Iran and Somalia, to China and Russia and Bangladesh, still use laws like these to intimidate, arrest, prosecute, and incarcerate members of minority religions, disfavored faiths, and freethinkers.

Everyone must be able to practice the faith or no faith at all without the threat of government violence and persecution. I’m pleased to support this excellent measure…

I’m gratified to see our bipartisan Resolution pass in the House. Authoritarian regimes use arbitrary blasphemy, heresy, and apostasy laws to imprison, torture, and kill religious minorities.  Today the House called for an end to these egregious human rights violations worldwide. I’m gratified by this crucial victory, but our work continues to ensure that no one is imprisoned for his or her religious beliefs across the globe. I look forward to continuing this critical work with my House and Senate colleagues and defending freedom of religion, liberty of conscience and tolerance everywhere.

Bottom line: Good News –  In a bipartisan effort the U.S. House has passed a resolution calling for the global repeal of blasphemy, heresy, and apostasy laws.

December 4, 2020
Christians Tear Down California Monolith, Replace It With Wooden Cross
Next Post 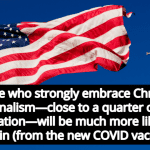 December 9, 2020 Study: Christian Nationalists Much More Likely To Refuse New COVID Vaccine
Recent Comments
0 | Leave a Comment
"And JC said, starve the little chidren, for as much as you do it unto ..."
David Cromie Fox News Guest: Children Don’t Deserve ..."
""....are there no work houses....""
Erik1986 Fox News Guest: Children Don’t Deserve ..."
"Tsarist Russia was anything but a free market, and neither was the aristocratic system in ..."
Person223 Fox News Guest: Children Don’t Deserve ..."
"The right of males to reproduce, rendering a woman's reproductive organs chattel, disregarding the whole ..."
Anon E Moss New Legislation In Tennessee Would Allow ..."
Browse Our Archives
get the latest from
Progressive Secular Humanist
Sign up for our newsletter
POPULAR AT PATHEOS Nonreligious
1