Good News: In a unanimous vote lawmakers in Canada’s parliament pass a motion to declare the Proud Boys a terrorist organization.

The Canadian House of Commons has passed legislation that calls for classifying the far-right Proud Boys group as a terrorist organization.

The measure passed the legislature’s lower chamber by an unanimous margin on Monday.

By unanimous consent, the #HoC adopted a motion regarding the proliferation of white supremacist and hate groups and the designation of the Proud Boys as a terrorist entity.

A motion to designate the Proud Boys as a terrorist organization in Canada passed unanimously in the House of Commons Monday night.

The motion, which was put forth by the New Democratic Party party leader Jagmeet Singh, calls on the Trudeau government to immediately ban and designate the Proud Boys as a terrorist organization.

Canadian lawmakers just voted unanimously to call on the government to declare the Proud Boys a terrorist group.

The vote passed unanimously, without a single dissent. pic.twitter.com/pOVUukRPTO

Previously Progressive Secular Humanist reported that the Proud Boys were “plotting to disguise themselves as Joe Biden fans to wreak havoc during the presidential inauguration.”

And last September, during a presidential debate, when asked to condemn the political violence of the Proud Boys and other alt-right, white nationalist groups, Trump refused, and instead gave a shout out to the Proud Boys, telling them to “stand back and stand-by.”

Bottom line: In a unanimous vote lawmakers in Canada’s parliament pass a motion to declare the Proud Boys a terrorist organization. 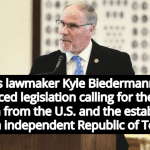 January 28, 2021 Republic of Texas: GOP Lawmaker Files Bill For Texas Secession From United States
Recent Comments
0 | Leave a Comment
Browse Our Archives
get the latest from
Nonreligious
Sign up for our newsletter
POPULAR AT PATHEOS Nonreligious
1