Criminal Behavior: CNN reporter Jim Acosta sounded the alarm earlier today after seeing what appeared to be Trump staff removing items from the White House, including a bust of Abraham Lincoln.

CNN chief White House correspondent Jim Acosta painted a bleak portrait of the final Thursday of the Trump administration during an interview with Brooke Baldwin.

I will tell you, you talk to sources close to the White House, people inside the White House, they describe a situation where the president is basically isolated, behind closed doors. He’s whining about this impeachment, he’s whining about being held responsible for what happened on January 6th. He’s also sort of casting off advisers and aides who aren’t telling him what he wants to hear.

And there is a split screen because Vice President Mike Pence is almost acting like a de facto president right now. He’s attending briefings like national security briefings on inauguration security preps and so on and it is a striking sort of way to look at the end of the Trump presidency.

And we are seeing what looks like moving day over at the White House. You are seeing items coming and going from the West Wing. We saw Larry Kudlow leaving earlier today. Here’s a bust of Abraham Lincoln being carried out of the West Wing.

People need to know that the items inside the White House are not giveaways, they’re not souvenirs you can take home. This is not an estate sale or Antiques Roadshow, but yet you’re seeing some White House staffers taking mementos with them as they go. And so it is a strange sort of surreal look at the end days of the Trump presidency, but that’s what we’re in the midst of right now.

Make sure that Giuliani does not grab and resell the George Washington portrait that hangs in the White House East Room in payment of his Trump legal bills.

BREAKING via Jim Acosta: Trump’s people appear to be looting the White House, including nabbing a bust of Abraham Lincoln.

Should we let them get away with this? pic.twitter.com/pUzucobwcE

When you see someone looting the White House but then you remember that it’s your boss that’s doing it. pic.twitter.com/TUCUZr5s45

Bottom line: CNN reporter Jim Acosta sounded the alarm earlier today after seeing what appeared to be Trump staff removing items from the White House, including a bust of Abraham Lincoln. 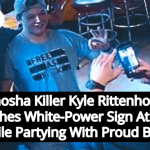 January 14, 2021
Kenosha Killer Kyle Rittenhouse Parties With Proud Boys While Out On Bond
Next Post

Defend Your Reputation! (Satire)
Is your reputation at risk? Are online trolls attacking you? When someone...
view all Nonreligious blogs
What Are Your Thoughts?leave a comment
Copyright 2008-2020, Patheos. All rights reserved.