Cheeto Jesus: Leading evangelist Franklin Graham compares Trump to Jesus while condemning the impeachment and the Republican members of congress who supported it.

Shame, shame on the ten Republicans who joined with Speaker Nancy Pelosi and the Democrats in impeaching President Trump yesterday. After all that he has done for our country, you would turn your back and betray him so quickly? We have never had a president like him in my lifetime. He gave us lower taxes, a strong economy, and low unemployment. He made NATO take notice and pay their own way. He had the guts to take on North Korea and meet with their leader personally. He didn’t let China walk all over us. Just his Mideast peace initiatives in the last couple of months deserve a Nobel Peace Prize. He has defended religious liberty like no president before him, and that matters to all people of faith. He has worked to bring prison reform and secured our southern border. He defeated the ISIS caliphate in Syria, and he strengthened our military. He was also the most pro-life president we have ever had. But the House Democrats impeached him because they hate him and want to do as much damage as they can. And these ten, from his own party, joined in the feeding frenzy. It makes you wonder what the thirty pieces of silver were that Speaker Pelosi promised for this betrayal.

Shame, shame on the ten Republicans who joined with Speaker Nancy Pelosi and the Democrats in impeaching President Trump…

In his post, Graham compares the ten Republicans who voted for impeachment to Judas, who supposedly betrayed Christ for “thirty pieces of silver.”

“It makes you wonder what the thirty pieces of silver were that Speaker Pelosi promised for this betrayal.”

It should be noted that comparing the Republicans who supported impeachment to Judas could be considered a call to violence.

In addition, it follows from that comparison that Graham is comparing Trump to Christ.

The following is a sample of reactions to Graham’s statement:

You can mark Franklin Graham comparing Trump to Jesus off your presidential transition bingo card https://t.co/Hz7TUxpS3J

It’s not easy to be a Christian in America today but luckily there are people like Franklin Graham to make it virtually impossible. https://t.co/kQc95VBWAR

Franklin Graham in a Facebook post compared Republican lawmakers who voted for Trump impeachment to Judas’ betrayal of Jesus for 30 pieces of silver.

This full post by @Franklin_Graham comparing the Republicans who voted to impeach Trump to Judas is unhinged. Trump’s presidency has served as a CAT scan on white evangelical Christianity in America; much of what’s been revealed is sick and sickening. pic.twitter.com/WqVfAESsle

Bottom line: Leading evangelist Franklin Graham compares Trump to Jesus while condemning the impeachment and comparing the Republican members of congress who supported it to Judas. 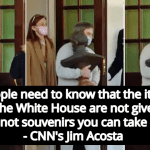 January 15, 2021 Florida Teacher Fired After Telling Students Antifa Was Behind Capitol Insurrection
Recent Comments
0 | Leave a Comment
"And JC said, starve the little chidren, for as much as you do it unto ..."
David Cromie Fox News Guest: Children Don’t Deserve ..."
""....are there no work houses....""
Erik1986 Fox News Guest: Children Don’t Deserve ..."
"Tsarist Russia was anything but a free market, and neither was the aristocratic system in ..."
Person223 Fox News Guest: Children Don’t Deserve ..."
"The right of males to reproduce, rendering a woman's reproductive organs chattel, disregarding the whole ..."
Anon E Moss New Legislation In Tennessee Would Allow ..."
Browse Our Archives
get the latest from
Nonreligious
Sign up for our newsletter
POPULAR AT PATHEOS Nonreligious
1