Domestic Terrorist: Congressman Mo Brooks makes “no apology” for calling on Trump-loving terrorists to “kick ass” before they stormed the U.S. Capitol.

In the statement, Brooks attacked critics who have accused him of inciting the mob with his speech, in which he exhorted the crowd to “start taking down names and kicking ass.”

In a text message to AL.com Brooks said:

I make no apology for doing my absolute best to inspire patriotic Americans to not give up on our country and to fight back against anti-Christian socialists in the 2022 and 2024 elections. I encourage EVERY citizen to watch my entire rally speech and decide for themselves what kind of America they want: One based on freedom and liberty or one based on Godless dictatorial power.

In a lengthy and unhinged official statement, Brooks claimed that he was the victim of a “smear campaign” after being widely condemned for  instructing Trump-loving domestic terrorists to “start taking down names and kicking ass” minutes before the assault on the U.S. Capitol began.

In a statement punctuated with Bible quotes and claims of persecution, Brooks blames “Socialist Democrats and Fake News Media” for his current problems.

Brooks even goes so far as to argue that he could not be responsible for inciting the domestic terrorists because he is a “straight arrow.”

In his defense the juvenile imbecile declares:

Let me share a little about myself.  My long-time acquaintances and family would describe me as a straight arrow or a “square”.

I have never smoked tobacco.

I have never taken illegal drugs.

I have never been accused or convicted of any felonies or misdemeanors.

In the end, nothing will change the fact that standing before the crowd that would storm the U.S. Capitol, an enthusiastic Brookes egged the violent crowd on, declaring:

Today is the day American patriots start taking down names and kicking ass.

Bottom line: Congressman Mo Brooks makes “no apology” for calling on Trump-loving terrorists to “kick ass” before they stormed the U.S. Capitol. 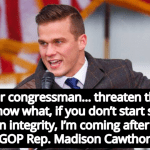 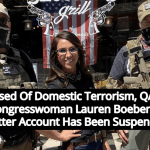 January 13, 2021 Accused Of Aiding Terrorists, Twitter Locks QAnon Congresswoman Boebert’s Account
Recent Comments
0 | Leave a Comment
"And JC said, starve the little chidren, for as much as you do it unto ..."
David Cromie Fox News Guest: Children Don’t Deserve ..."
""....are there no work houses....""
Erik1986 Fox News Guest: Children Don’t Deserve ..."
"Tsarist Russia was anything but a free market, and neither was the aristocratic system in ..."
Person223 Fox News Guest: Children Don’t Deserve ..."
"The right of males to reproduce, rendering a woman's reproductive organs chattel, disregarding the whole ..."
Anon E Moss New Legislation In Tennessee Would Allow ..."
Browse Our Archives
get the latest from
Nonreligious
Sign up for our newsletter
POPULAR AT PATHEOS Nonreligious
1