They Did It For Jesus: Many of the Trump-loving domestic terrorists who stormed the U.S. Capitol yesterday were White Christian Nationalists, waving Christian flags, holding signs praising Jesus, and saying prayers after they broke into the building.

When a mob of supporters of President Donald Trump stormed the Capitol building on Wednesday afternoon, many carried weapons, wore red MAGA hats, and draped themselves in the candidate’s flag. After legislators and their staff had been evacuated, Trump supporters entered the Senate chamber. With them came a Christian flag.

Indeed the Christian flag, and Christian symbolism, were prominent fixtures among the terrorists storming the Capitol building. Religion Unplugged reports:

The insurrectionist mob that stormed the U.S. Capitol on Wednesday carried an array of flags and signs that indicate that not only are they Republicans, but also that they are Christians.

As the mob swarmed the Capitol steps, climbed the inaugural scaffolding and even scaled the building like it was a gym climbing wall, the now commonplace red, white and blue “Trump 2020” and “Make America Great Again” flags flew alongside flags and banners with a range of Christian symbols. A giant wooden cross was installed across from the Capitol building as well.

… these pro-Trump terrorists carried not only American, Confederate, and Trump flags, but also explicitly Christian symbols along with signs and flags bearing anti-choice, QAnon, and right-wing Christian slogans like “The Children Cry Out for Justice” and the not-so-apolitical after all “Jesus 2020,” …

Jeffrey Goldberg writing for The Atlantic, reports on his experience at the Trump rally held before the assault on the U.S. Capitol:

For the record, White Christian Nationalism is the false belief that America is a Christian nation, a belief supported by much misguided conservative Christian theology. It is a radical right wing movement composed of Christian extremists that want to rewrite American history, and replace the secular values upon which this nation was founded with a Christian theocracy.

I think that [the demonstrators and rioters] believe that God has a specific plan for this country, and that their vision for the country has been given to them by God.

Christian nationalism at its core is this desire to see Christianity be privileged in the public sphere.

In many ways, Christian nationalism is a threat to a pluralistic democracy where we have norms like the peaceful transfer of power.

Commenting on the Christian imagery of the terrorists, Brandi Miller, host of the podcast Reclaiming My Theology, said:

The image of Jesus in a lot of white evangelical conservative Christianity has been conformed to the image of Donald Trump himself: full of violence, power, hoarding, name calling, violently taking what you want and engaging with power and privilege.

Bottom line: Many of the Trump-loving domestic terrorists who stormed the U.S. Capitol yesterday were White Christian Nationalists, waving Christian flags, holding signs praising Jesus, and saying prayers after they broke into the building. 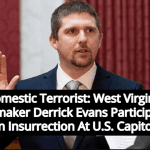 January 7, 2021
West Virginia Lawmaker Derrick Evans Was One Of The Terrorists Storming U.S. Capitol
Next Post 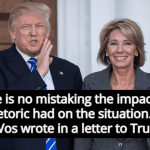