Texit: Texas lawmaker introduces legislation calling for the state’s secession from the United States and the establishment of an independent Republic of Texas.

On Tuesday, Texas Rep. Kyle Biedermann (R-Fredericksburg) filed House Bill 1359, otherwise known as the Texas Independence Referendum Act. If passed, it would allow Texans to vote on whether the Texas Legislature should create a joint interim committee to develop a plan for achieving Texas independence.

If the legislation is approved by the Texas House and Senate and signed by Gov. Greg Abbott, voters in the state would be presented with the following question:

Should the legislature of the State of Texas submit a plan for leaving the United States of America and establishing an independent republic?

Today, I filed HB 1359, the Texas Independence Referendum Act. For decades, the promises of America & our individual liberties have been eroding. Now is the time for the People of Texas to have the right to decide their own future. #LetTexansVote #Texit https://t.co/VTKosQKGBl pic.twitter.com/X2gDIDjYrv

The bill’s sponsor, GOP Rep. Kyle Biedermann, argues that House Bill (HB) 1359, dubbed “The Texan Independence Referendum Act,” would give Texans a choice on whether or not to secede:

This act simply lets Texans vote. This decision is too big to be monopolized solely by the power brokers in our Capitol. We need to let Texans’ voices be heard! Voters of all political persuasions in Texas can agree on one thing, Washington, D.C., is and has been broken. Our federal government continuously fails our working families, seniors, taxpayers, veterans and small business owners. For decades, the promises of America and our individual liberties have been eroding. It is now time that the people of Texas are allowed the right to decide their own future. This is not a left or right political issue. Let Texans vote!

Texas is seen as the bastion of freedom and a leader of free enterprise, which has built a robust economy, financial solvency and capacity for massive energy production worthy of the world stage. These are all indications that the Republic of Texas would not just survive but thrive as an independent nation. Now is the time for Texas to lead.

Bottom line: Texas lawmaker Kyle Biedermann has introduced legislation calling for the state’s secession from the United States and the establishment of an independent Republic of Texas. 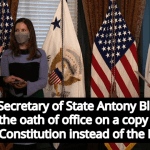 January 28, 2021 Secretary Of State Antony Blinken Takes Oath On Constitution Instead Of Bible
Recent Comments
0 | Leave a Comment
Browse Our Archives
get the latest from
Progressive Secular Humanist
Sign up for our newsletter
POPULAR AT PATHEOS Nonreligious
1