Indeed the Christian flag, and Christian symbolism, were prominent fixtures among the terrorists storming the Capitol building. Religion Unplugged reports:

The insurrectionist mob that stormed the U.S. Capitol on Wednesday carried an array of flags and signs that indicate that not only are they Republicans, but also that they are Christians.

As the mob swarmed the Capitol steps, climbed the inaugural scaffolding and even scaled the building like it was a gym climbing wall, the now commonplace red, white and blue “Trump 2020” and “Make America Great Again” flags flew alongside flags and banners with a range of Christian symbols. A giant wooden cross was installed across from the Capitol building as well.

… these pro-Trump terrorists carried not only American, Confederate, and Trump flags, but also explicitly Christian symbols along with signs and flags bearing anti-choice, QAnon, and right-wing Christian slogans like “The Children Cry Out for Justice” and the not-so-apolitical after all “Jesus 2020,” …

Jeffrey Goldberg writing for The Atlantic, reports on his experience at the Trump rally held before the assault on the U.S. Capitol:

In short. many of the Trump-loving domestic terrorists who stormed the U.S. Capitol were committed Christians.

As for Jeffress, an obviously ignorant and small-minded man, he is no stranger to controversy. Previously he made the ridiculous claim that only those who’ve “sold their soul to the devil” will vote for Joe Biden.

While campaigning for Trump this “good Christian” warned Jews that they and their children would be cursed by God if they voted for Democrats.

And in the past Jeffress made the ridiculous claim that climate change is an “imaginary crisis” because God’s rainbow means “that the polar ice caps aren’t going to melt and flood the world again.” 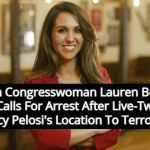 January 10, 2021 Report: QAnon Congresswoman Was Live-Tweeting Nancy Pelosi’s Location To Terrorists
Recent Comments
0 | Leave a Comment
"Many atheists were once Christian. That's because Christianity will drive most intelligent, freethinking people to ..."
Larry Emmons Green Bay Packers Quarterback Aaron Rodgers ..."
""....won't flood the world again.". So, another non-bible reading preacher. Doesn't the Bible say something ..."
Erik1986 Robert Jeffress: Terrorists Storming U.S. Capitol ..."
"I volunteered also--it didn't get me what I wanted but it also didn't get me ..."
democommiescrazierbrother Study: Nearly 1 In 5 Terrorists ..."
"Le mot juste about!"
skinnercitycyclist Study: Nearly 1 In 5 Terrorists ..."
Browse Our Archives
get the latest from
Progressive Secular Humanist
Sign up for our newsletter
POPULAR AT PATHEOS Nonreligious
1