The Stupid, It Burns: Fox News host Bill Hemmer is mocked online after warning that “cancel culture” will “come after Bible characters next.”

Fox News anchor Bill Hemmer said Friday that “cancel culture” will “come after Bible characters next” during a discussion of the Chicago initiative to review historical statues in the city, including ones of former President Lincoln.

Cancel culture could “come after Bible characters next,” warned Fox News anchor Bill Hemmer on Friday, during a segment about Chicago putting dozens of its monuments under review.

During a segment on Chicago monuments, a self-righteous if clueless Hemmer declared:

If they start canceling American presidents, they’ll come after Bible characters next.

Way, way back in the day when I was first working in local news, I was at a CBS affiliate in Springfield, Illinois, and Lincoln was everything. A part of every aspect of the city and there was even a sandwich named after Abraham Lincoln. I don’t think they’ll take the sandwich name away.

At that point Hemmer opined:

If they start canceling American presidents, they’ll come after Bible characters next. Mark my words…

As one might imagine, Hemmer was mocked on social media for his “cancel culture” paranoia. For example:

Moses desperately scrolling through his tablets to delete the problematic Commandments https://t.co/cHU8hDPNSX

The use of the word “character” is telling here. Believers don’t call Bible figures “characters.”

It’s all a game for these clowns. https://t.co/Fa4PwGrKOC

Oh man I hope Uzzah the cart driver from 2 Samuel 6:3 is next ‘cuz that dude was an ASSHOLE. https://t.co/u1jIcW8eYc

“Characters”? Good to know that Fox News has declared The Holy Bible a work of fiction. https://t.co/wGtq9Jet4O

Bill Hemmer just canceled them himself by calling them “characters.” � https://t.co/KJ3i4LGyjl 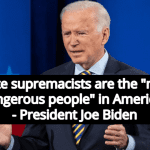 February 18, 2021
Biden Identifies White Supremacists As ‘Most Dangerous’ People In America
Next Post 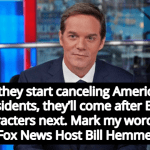 February 19, 2021
Recent Comments
0 | Leave a Comment
""follow my rules or burn for ever" ----- That's NOT what the Bible says."I agree, ..."
Mark Bradshaw Ana Kasparian’s Glorious Rant On Christianity ..."
"They're blaming the Democrats for banning Dr Seuss and posting warnings about Sesame Street etc.Of ..."
Jim Jones Fox News Host Bill Hemmer Warns ..."
"I agree, but the question is a translation issue, not an interpretation issue so my ..."
Kit Hadley-Day Ana Kasparian’s Glorious Rant On Christianity ..."
"“the authority depends on the topic” ----- Yes. And the topic here is what the ..."
Mark Bradshaw Ana Kasparian’s Glorious Rant On Christianity ..."
Browse Our Archives
get the latest from
Progressive Secular Humanist
Sign up for our newsletter
POPULAR AT PATHEOS Nonreligious
1