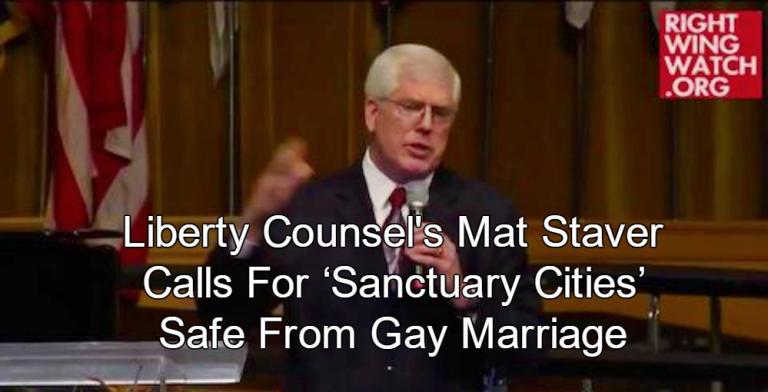 Desperate to escape the supposed scourge of marriage equality, Christian extremists are calling for “sanctuary cities” free from same-sex marriage.

Leading the call is Mat Staver, Founder and Chairman of Liberty Counsel, a prominent public interest law firm and ministry that provides free legal assistance in defense of “Christian religious liberty, the sanctity of human life, and the traditional family.”

You know what, if some cities can create sanctuary cities for illegal aliens, why can’t a city or a state create a sanctuary city or state to protect the preborn?

An eager Schneider chimed in:

…and to protect marriage.

To which Staver eagerly agreed:

…and to protect marriage, absolutely.

Currently Staver is one of the leading figures opposing marriage equality and urging government officials to “stand up and resist” the Supreme Court’s ruling on same-sex marriage.

As an opponent of marriage equality, Staver is representing Kentucky County Clerk Kim Davis who is refusing to issue marriage licenses to gay and lesbian couples because of her “sincerely held religious beliefs.

On the program Staver said Davis should not be compelled to issue same sex marriage licenses because she would be giving those couples a “license” to “engage in a sinful activity with a sinful relationship,” noting:

Staver claims Davis is justifieds in her refusal to do her job because she is simply unwilling to “authorize someone to do something that itself is sinful, that is repugnant to her and the scriptures and to natural millennia of human history, natural law.”

Note: Davis, who refuses to issue same-sex marriage licenses because of her “sincerely held religious beliefs,” has been married four times.

Suffer The Children: A 7-year-old Georgia boy with no underlying conditions is dead from COVID-19 after being forced to attend a church service where two elderly members also contracted the virus and died.

A 7-year-old Georgia boy who died of Covid-19 attended a Chatham County church where two elderly members had died after testing positive for the coronavirus, according to county Coroner Bill Wessinger.

A 7-year-old boy has died of COVID-19 in Chatham County, the Georgia Department of Public Health (DPH) reported Thursday.

This marks not only the youngest death in Chatham County but in the state of Georgia.

The Georgia Department of Public Health reports that the boy had no underlying medical conditions. After having a seizure while taking a shower the boy was rushed to the hospital where he later died.

According to reports, the boy’s death has been linked to Savannah Holy Church of God where there are nine reported cases of COVID-19.

Every COVID-19 death we report is tragic, but to lose someone so young is especially heart-breaking. We know that older individuals and those with underlying conditions are at higher risk of complications, but this is a disease everyone should take seriously. Please watch out for each other, wear a mask in public, wash your hands often, and stay home if you’re sick. A community-wide crisis demands a community-wide response, and we all must do our part to keep each other safe.

In a statement commenting on the tragedy, Georgia Governor Brian Kemp said:

This child’s death is absolutely tragic, and we are praying for their loved ones in this difficult time.

However, Kemp’s “prayers” ring hollow, given the fact that the Georgia governor has been fighting against face mask mandates despite the fact that face masks are known to stop the spread of the virus.

Adding insult to injury, last April Kemp made headlines after demonstrating an astonishing intellectual incompetence by making the ludicrous claim that he didn’t know asymptomatic people could transmit the COVID-19 virus.

Bottom line: A 7-year-old Georgia boy with no underlying conditions is dead from COVID-19 after being forced to attend a church service where two elderly members also contracted the virus and died. 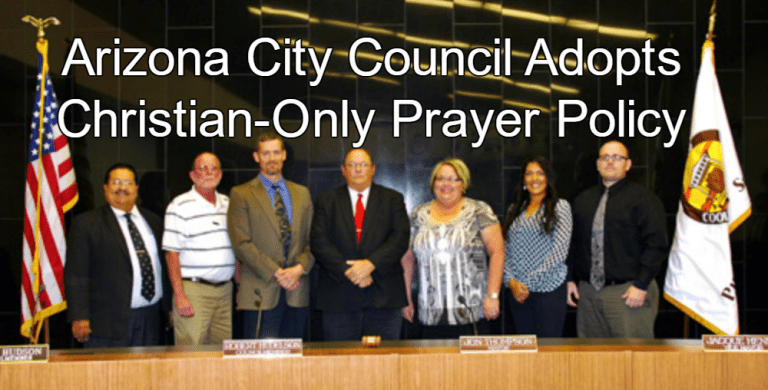 In an egregious bit of political malpractice an Arizona city council has passed a resolution to open all public meetings with Christian-only prayers.

The Coolidge Examiner reports that a majority of the Coolidge City Council passed a resolution  on Monday that would allow prayers before council meetings, with a stipulation that all such opening prayers be Christian.

According to the report, council members ignored legal counsel and concerns about a possible lawsuit, and went ahead and passed the clearly illegal resolution.

For the record, it is legal to open public government meetings with prayers, as long as the prayer policy is inclusive, and all faiths are given a chance to deliver an opening prayer. However, to make the prayer policy exclusively Christian is illegal, unconstitutional, and a lawsuit waiting to happen.

The City Attorney, Denis Fitzgibbons, tried to explain to Council members that the resolution would violate the Establishment Clause by referencing the 2014 Supreme Court case Town of Greece v. Galloway and noting that mandating  Christian-only prayers “would complicate things,” before stating:

The council would then be establishing Christianity (as the official city religion).

Nevertheless, the Council passed the resolution by a 4-2 vote.

Council member Rob Hudelson, who is also a preacher, moved to amend the resolution to stipulate that the opening prayers be Christian-only after making the fallacious claim that the United States is a Christian nation.

At the meeting Hudelson declared:

I think it’s very important. We just proclaimed Constitution Week. You know what was said at the end of the (Revolutionary) war? A treaty in Paris that said ‘In the name of the most Holy and undivided Trinity.’ You don’t get that from the Quran. You get it from the Bible. You get it from Christianity. That’s our heritage.

We’re stepping into territory that might lead us into litigation. I don’t want to bring us any more problems.

I’m not going to get the taxpayers sued. … We’re going to knowingly become involved in litigation that we cannot afford.

Mayor Thompson is right, and a voice of reason in a council dominated by Christian extremists with no respect for the U.S. Constitution and the rule of law.

The Resolution is subject to a 30-day review period, and hopefully the illegal resolution will be modified or dropped. If the resolution is not changed, lawsuits are inevitable, and the city will lose.

Bottom line: Despite the fact that the city attorney carefully explained to council members that the resolution mandating Christian-only prayers is illegal, the reckless and negligent city council passed the resolution anyway. Ultimately, this story is just another example of Christian privilege, and why sectarian prayers of any kind should have no place at public government meetings. 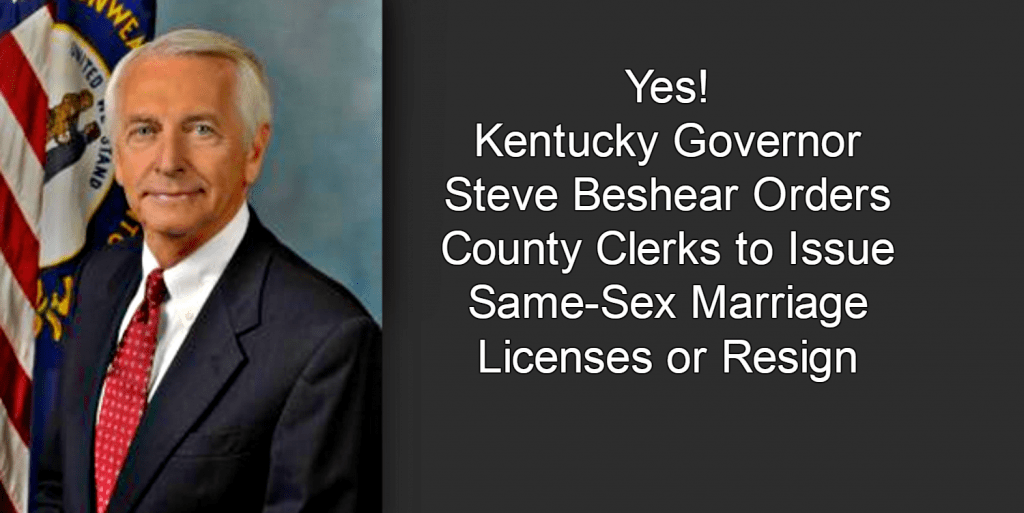 Kentucky’s Democratic Governor Steve Beshear tells an anti-gay county clerk who refuses to issue same-sex marriage licenses because of sincerely held religious beliefs to do his job or resign.

In a private meeting today, Kentucky Governor Beshear explained to Casey County Clerk Casey Davis that “he took a constitutional oath to uphold the United States Constitution” and he needs to do his job and issue same-sex marriage licenses or resign.

After meeting with the county clerk, Governor Beshear issued the following statement:

This morning, I advised Mr. Davis that I respect his right to his own personal beliefs regarding same-sex marriages. However, when he was elected, he took a constitutional oath to uphold the United States Constitution. According to the United States Supreme Court, the Constitution now requires that governmental officials in Kentucky and elsewhere must recognize same-sex marriages as valid and allow them to take place. One of Mr. Davis’ duties as county court clerk is to issue marriage licenses, and the Supreme Court now says that the United States Constitution requires those marriage licenses to be issued regardless of gender. Mr. Davis’ own county attorney has advised him that his oath requires him to do so.

I will not be calling any special session on this topic and costing the taxpayers hundreds of thousands of dollars doing so. Any proposal about the process of issuing marriage licenses that meets the standards of the Supreme Court ruling should be carefully thought out and could be considered in the regular session in 2016.

After meeting with Governor Beshear, Davis, who claims his Christian beliefs won’t allow him to license same-sex marriages, said he would go to jail before he resigned and vowed he would not issue any marriage licenses in Casey County.

Davis told reporters at the capitol that his position hasn’t changed. He won’t issue licenses to same-sex couples, and he also won’t resign. He recognizes that he could be sued or charged with official misconduct, but said:

I’m going to trust in the Lord with all my heart.

Davis may trust in the Lord, but he took an oath to uphold the United States Constitution. If his religious superstition and bigotry prevents him from honoring that oath, he needs to resign.

Josh Duggar and His Entirely Unsurprising...
Roll to Disbelieve
Browse Our Archives
TRENDING AT PATHEOS Nonreligious

Revisiting Tim Keller's The Reason for God
I don't really care for apologetics books. It's a tedious chore to...
view all Nonreligious blogs
Copyright 2008-2021, Patheos. All rights reserved.
error: Content is protected !!