An Atheist at the Cross (or Why the Suicide of God might be Good News) November 6, 2014 Linda LaScola

Editor’s Note: A secular chaplain offers a positive, modern and inclusive way of interpreting the Crucifixion, whether you’re religious or not. 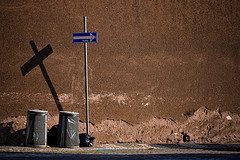 A secular person, a freethinker and an atheist can all find something at the cross. It’s even possible, I reason, that the cross itself could draw all people – faith or no faith. Come to the cross with me, I’ll show you.  During my years as an Evangelical Christian, these biblical verses were crucial (“the decisive crux”) in my life.

In those youthful years, I would even say those words were my life—absorbed in my memory. I was a Cross-centered Christian.(Is there really any other kind?) To be sure, the Resurrection was of high importance. We were always trying to prove it. It was the exclamation point after the cross (like a T!). For those of us who were “God’s People” and “Followers of Jesus,” the center of it all, our lives, our faith, was The Cross.

In my liberal seminary days and early ministry, I was in part driven by Bonhoeffer’s “come and die” alongside Moltmann’s “crucified god.” Facing a cross-filled world while sitting on top of the old rugged one, offered a very down-to-the-dirt perspective and practice. I suspect I could write a book on this, and maybe I will someday, but here’s where my thoughts have arrived after all these years.

First, the summary we all know, (I think):

The cross—or a rough pole in the ground—was first and foremost a common tool of execution by the Romans (like our gas chambers and lethal injections).

In Christian Theology, God died on the cross (at least some part of God committed suicide).

The death of Jesus of Nazareth (the human part of God) was a sacrificial event determined by God (the Father killing His Son).

The sins of the world (those things God decided were wrong about His flawed human children) were forgiven there (blood was required).

You must be a Christian believer before you can benefit from that sacrifice.

Every human being must come to the cross or be tortured for eternity.

Leaving aside, for a moment, 2,000 years of fighting over what all this means, I come to the cross now for a different reason. I want to reclaim the cross for both believers and non-believers. I think this is preferable to following my temptation to push it over, cut it down or burn it to sacrifice this ancient symbol of death for all it has done to divide the world forcenturies.

Is it possible to reclaim the cross, and if so, why in the world would I wish to attempt that? As I say, leaving aside the theological explanations for this event, the story says an ancient Jewish freethinker was executed by the Roman state. He must have been seen as some kind of criminal threat, an outside agitator or maybe a terrorist to that paranoid government. Like countless other criminals in the Roman judicial system, he was nailed up and died. His students and friends were devastated and without hope. They recovered some of that hope and went on to create a religion, gathered around the cross (not the tomb). I would guess that what they made would be unrecognizable to the one hanging there exposed to the world.

Ok, that’s essentially the Christian message. Christianity in the crosshairs. But is it? Should it be?  I know a number of “Progressive” Christians who do not give much time to the cross or atonement theology. They are more social justice or education directed. That’s a good step in the right direction, in my opinion, but it doesn’t go far enough.

Here’s another view; not simply good news but better news — a message that potentially gives us all, theist and atheist, something to rally around and work with.  You can come to the cross as:

So, we need not be afraid to come to the cross, to look very closely and even touch it.

Like the Jewish Nazarene and countless others who bled on a cross, it does not belong to Christians and it never has. The cross was no doubt a reusable execution device anyway! We can imagine an ancient Palestinian heretic hanging up there and feel some sadness for that. We can think of how deeply hurt his family and friends were. Then we can imagine all those who have suffered and continue to suffer through injustice, discrimination, physical or mental anguish (and, of course, wars of faith). We can sense that. We can feel it. By running our hand over the blood-splattered, splintering wood, we can touch our own compassion. That makes his life, and our own, much more meaningful than spraying a super-naturalizing cover-coat on the whole mess.

Foolishness? Perhaps, but I think not. It’s wisdom. The message of the cross on which a roustabout named Jesus bled out and died can be revolutionary, if seen in this light. He was not the first or the last to suffer for unacceptable beliefs. His execution may not redeem or save any of us. However, his death will not be in vain if nonbelievers can respectfully claim a piece of the old knotted wood currently guarded by believers and find ways to build something other than weapons with its branches. 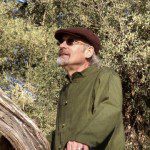 November 10, 2014 It’s Not You, It’s Me
Recent Comments
26 Comments | Leave a Comment
Browse Our Archives
get the latest updates from
Rational Doubt
and the Patheos
Nonreligious
Channel
POPULAR AT PATHEOS Nonreligious
1